Overview of Coverage and Results

Approximately 785 participants collectively reported a total of 42,621 field survey hours to the project (not all effort was logged, so the actual effort was greater). Their dedication made this project so incredibly successful. The name of every citizen scientist who contributed is presented in the Acknowledgements.

A total of 326,702 individual records were submitted for 2,994 atlas squares. Breeding evidence was submitted for 299 bird species (Appendix 1a) and records obtained for 13 other species that were inconclusive as to whether local breeding occurred or not. Figures 1 and 2 show the number of hours (by category) and number of species (also by category), respectively, reported in each square. 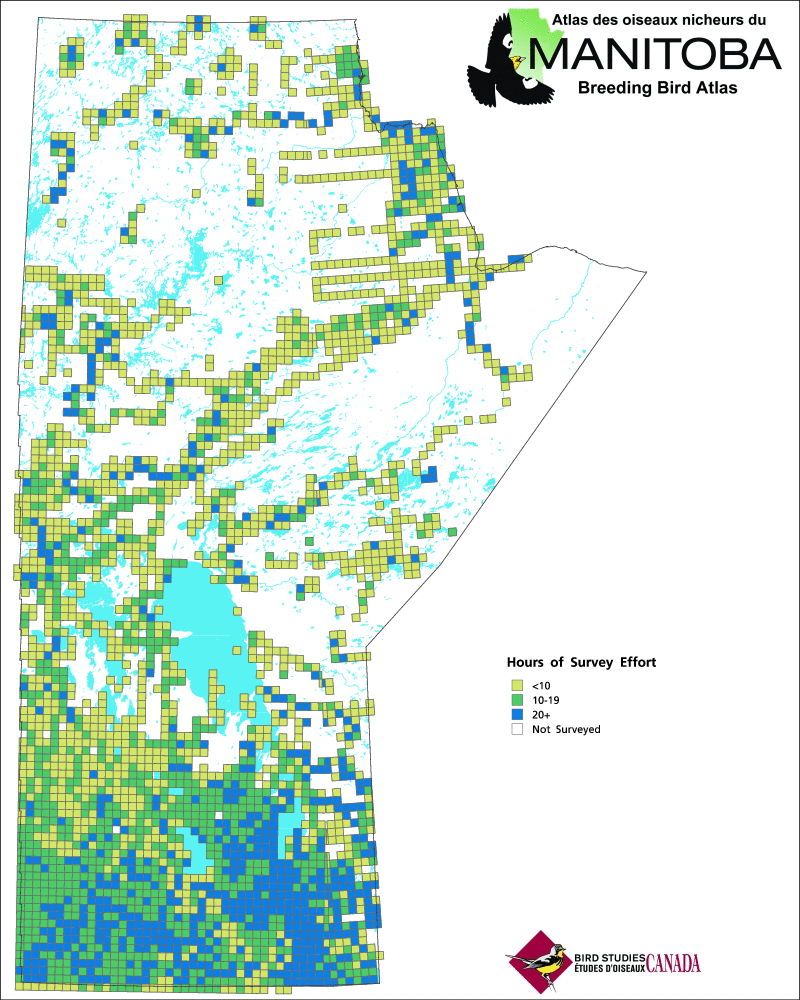 Figure 1. Number of hours of survey effort reported for each 10 x 10-km square 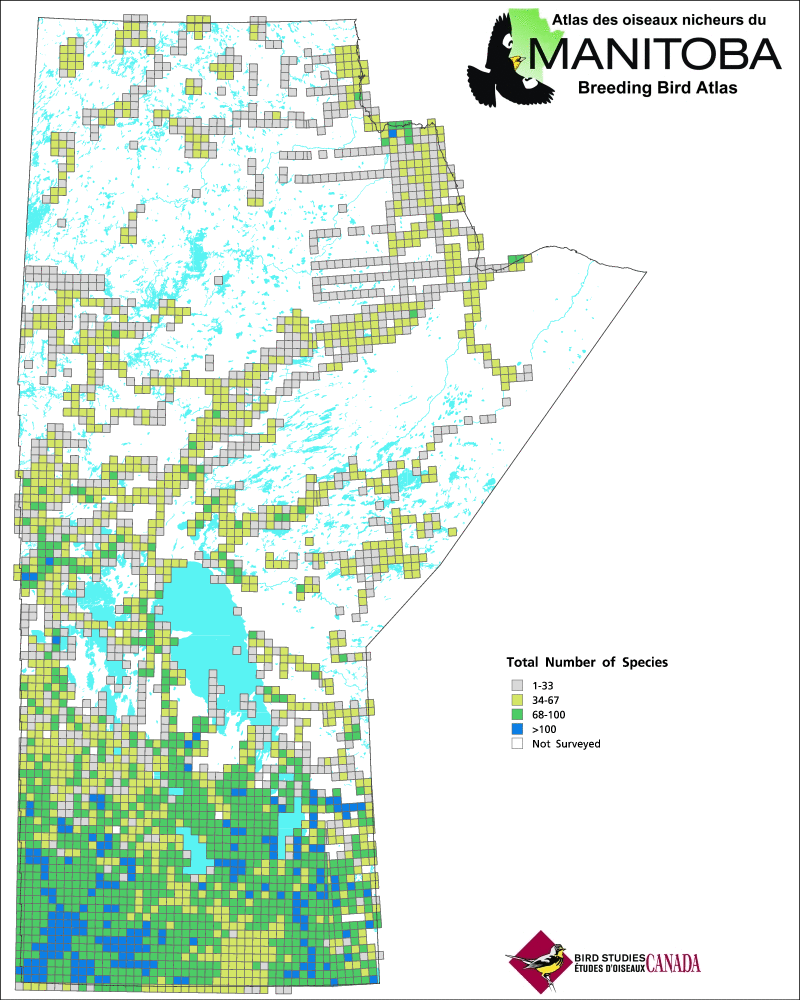 Figure 2. Number of species recorded in each 10 x 10-km square

There were 379 squares with 0 hours coverage reported (Figure 3); these largely represent external contributed datasets that supplemented volunteer coverage (see Additional Data Sources, below). The average number of species reported in these squares was low (6.6), indicating that most of them were casual observations without any associated effort. 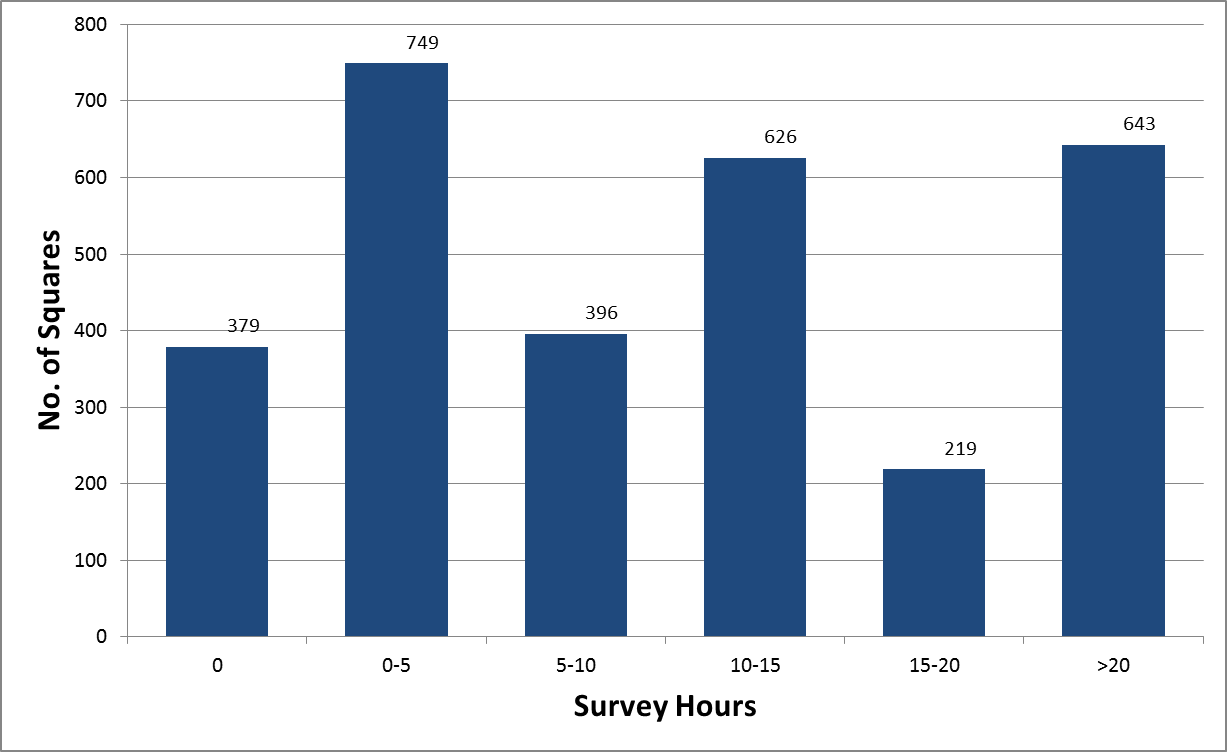 Figure 3. Number of squares surveyed by number of survey hours reported (note, not all surveyors reported the time of each visit to 10 km squares, so bars represent a minimum effort). 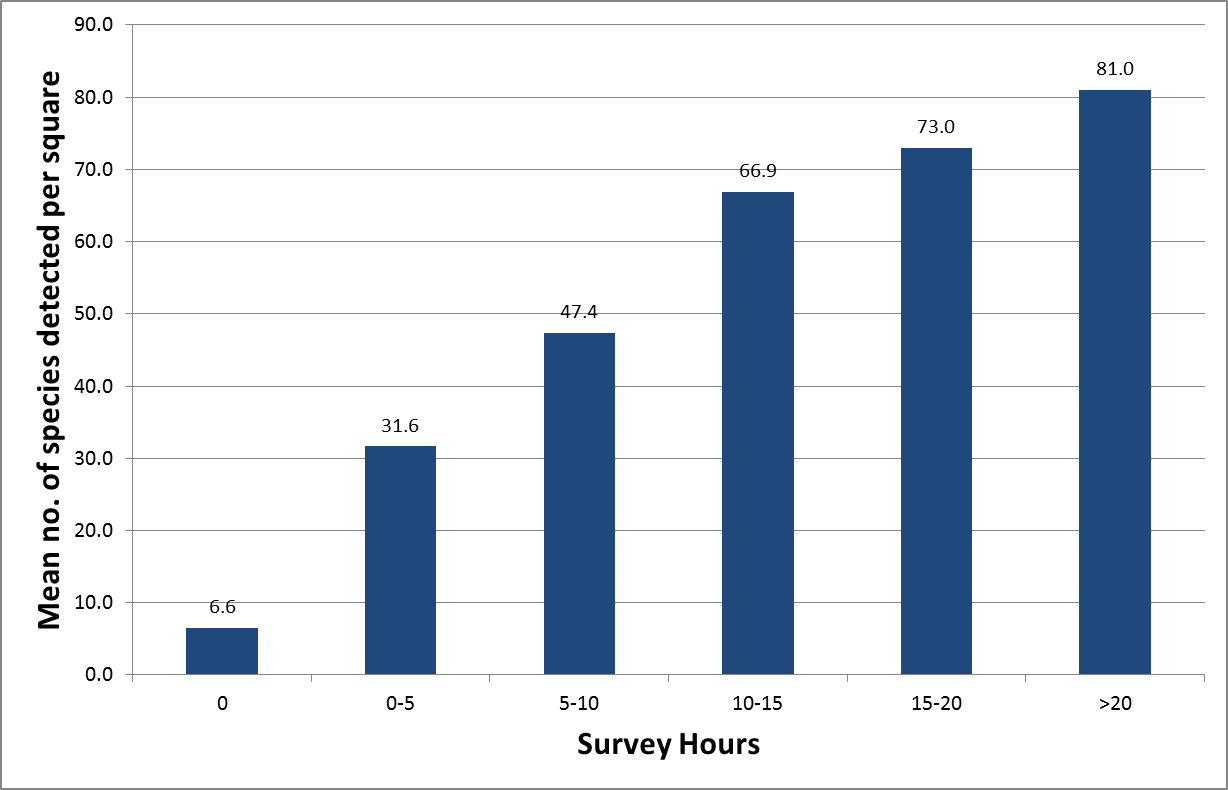 Figure 4. Average number of species recorded per 10 x 10-km square by survey effort (number of squares sampled is indicated at the top of each bar). 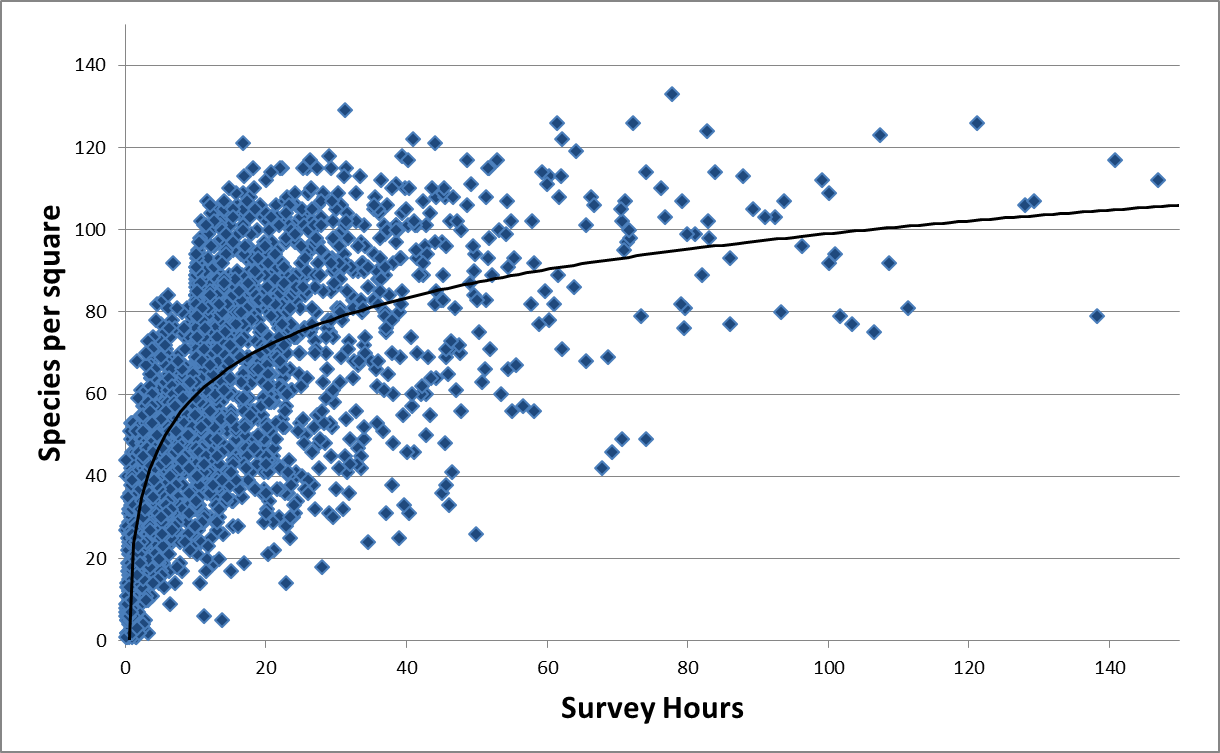 Most breeding evidence survey effort was conducted between May and July (Figure 6), when the majority of songbirds breed in Manitoba. Survey effort outside this period focused on specific species and guilds (e.g., dusk and evening surveys for owls from February to April; specific searches in likely habitat for early season breeders such as Sharp-tailed Grouse, Gray Jay, and some waterfowl and raptors; and surveys for late breeders well into August and even later). Effort was thus somewhat biased toward species that breed from May through July, so species or groups that breed outside that window may have been under-sampled. If this is known, it is stated in the species account. Approximate breeding dates for bird species in Manitoba (southern - central - northern) are available here. 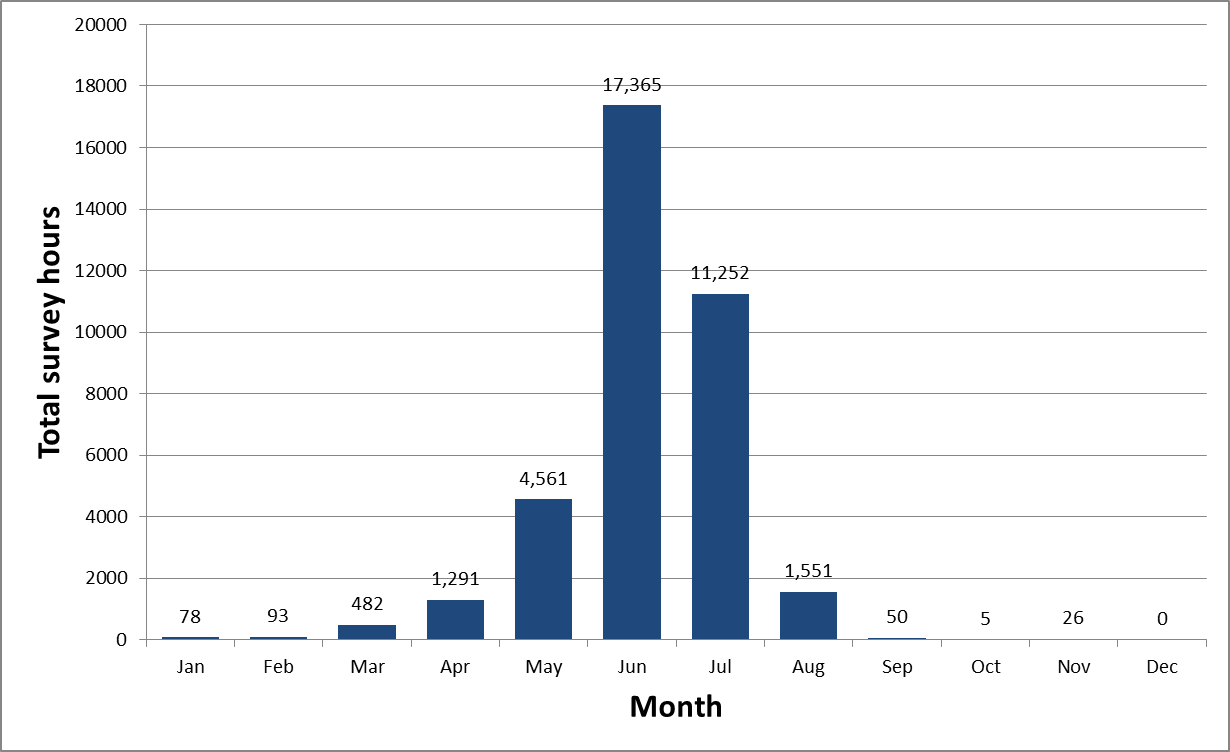 In total, 38,602 point counts were completed in 2,257 atlas squares (approximately two-thirds of all squares surveyed; Figure 7). This effort generated 336,048 individual records for 284 species. Over the five-year data collection period, 153 participants conducted point counts (including 26 who participated as part of a paid crew deployed to remote regions where volunteer access was difficult). 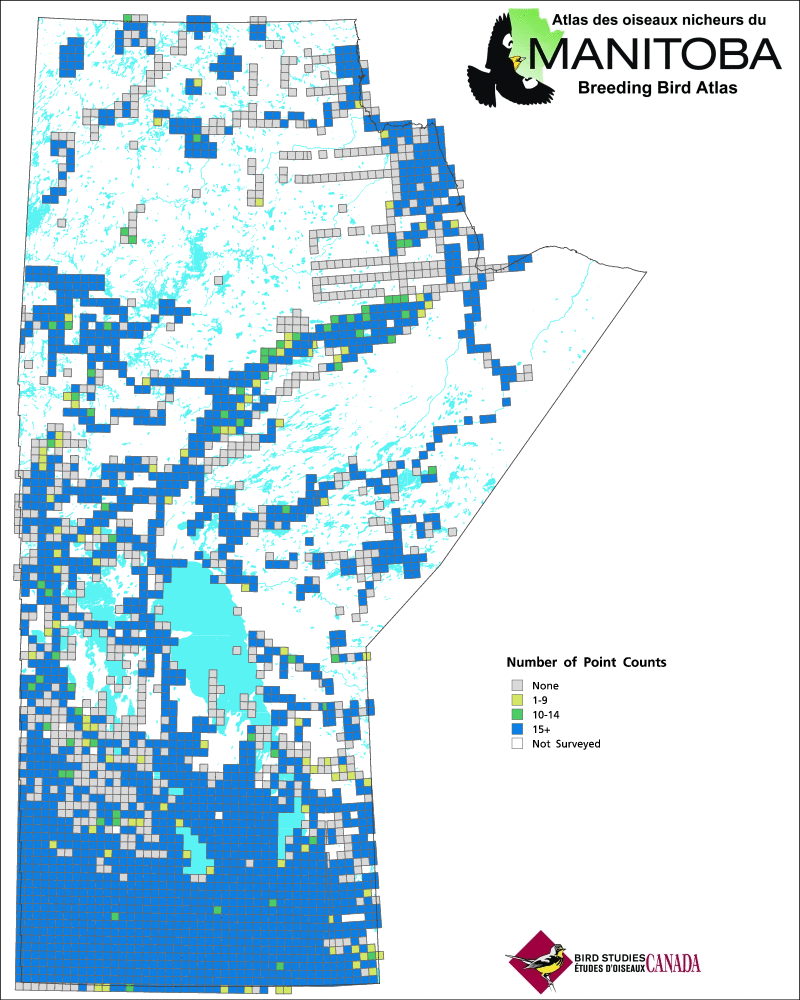 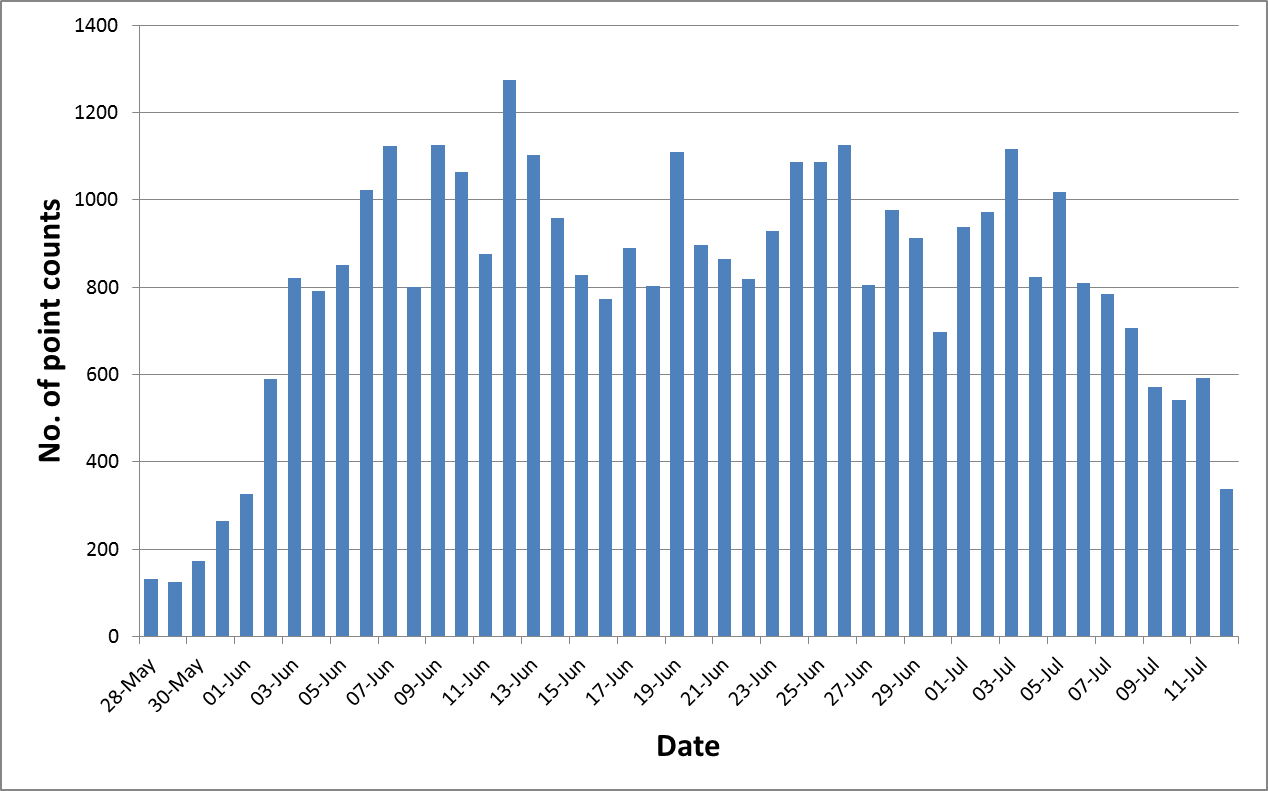 At Risk, Rare, and Colonial Species

A total of 14,674 records were submitted for 32 species assessed by COSEWIC and/or by Manitoba's Endangered Species and Ecosystems Act (Appendix 1b). Of these, 3,671 records (25%) had additional documentation (over and above a georeferenced location, which was all that was required in many cases). An additional 1,005 records were submitted of other species that were considered rare provincially or sub-regionally within the province, of which 788 records (78%) had further documentation (Appendix 1b). In the case of colonial nesting species, supplementary documentation was required only for confirmed breeding records; 10,117 additional records were submitted for 20 colonial species (Appendix 1c). The atlas has already contributed 12,866 new source features to the Manitoba Conservation Data Centre.

A total of 31,613 breeding evidence records for 372 squares came from 32 institutional or external data sources, representing approximately 10% of all atlas records. There were also 33,526 point count records for 372 squares from 8 institutional or external data sources. External data sources are listed in Table 1, along with the number of records contributed by each source. The Breeding Bird Survey (BBS) contributed 17,338 records from 199 squares. Note that BBS data were included as breeding evidence (distribution) data and not as point count data, because the BBS point count protocol (3-minute counts) differs from the atlas point count protocol (5-minute counts). Manitoba Hydro also represented a significant proportion of the additional data sources with 9,140 records submitted.

Table 1. List of additional data sources contributed to the atlas

A brief glance at the coverage map (Figure 1) shows that survey effort is naturally correlated with centres of human population. In remote areas, especially some northern regions, survey coverage is strongly correlated with the road network and fly-in communities. The difficulty of reaching the interior boreal forest, so much of which is roadless and peppered with floating bogs and other wetland types of enormous dimensions, by any means other than river-based transportation is clearly apparent in Fig. 9. That difficulty was further compounded by snow and ice, flooding, forest fires, and other hazards (including polar bears and countless mosquitoes!). We operated the project under the assumption that much of what we were doing was compiling new inventory information, and some information is always better than none. Decisions regarding the deployment of volunteers and paid crews were based on attempting to achieve, to the best of our ability, an even sampling of the biogeographic and habitat variation present within the province.

Figure 9. Atlassing is an all-inclusive activity that involves overcoming many challenges!

In a province the size of Manitoba, even with a 700-strong dedicated volunteer work force, biases like these are inevitable even with planning and mitigation. From its inception, the project mitigated these biases to the extent possible by actively supporting volunteers and paid crews to access remote areas by many innovative means, including canoe, kayak, motor boat, high rail (trucks that can drive along railways), float plane, helicopter and long hikes sometimes in excess of 100 km. These efforts required an exceptional amount of preparation and were often planned a year in advance. Many required preparing dried food and/or caching food and other resources in advance, including with the use of snowmobiles and kamatiks. The atlas office coordinated approximately 20 expeditions every year to achieve coverage targets. Many previously under-surveyed, and perhaps never-surveyed, parts of Manitoba were reached as part of these efforts. These efforts would not have been possible without the extremely generous help of many in-kind supporters from government agencies, lodges and outfitters, tourism companies, industries, and foundations.

The randomised nature of the atlas point count survey protocol meant that some restricted habitats (e.g., some wetland types) were not sampled as well as they would have been had more dedicated wetland-specific techniques beyond the scope of the atlas project been used. This was partially mitigated for some areas by several project partners contributing datasets from wetland surveys to augment the standard atlas protocol data collection.