How to read the Species Accounts

This section provides interpretation guidance for the accounts describing 299 species (13 additional species are discussed in an Appendix). The primary purpose of the species accounts is to help the reader interpret the maps, graphs and related data together with just enough natural history information from other sources to put those results into a meaningful context. We have purposely avoided providing detailed natural history information that is already well presented elsewhere (e.g., The Birds of Manitoba 2003), except where it is pertinent to interpreting atlas results.

In order to assist the reader in understanding the accounts, any technical terms used are defined. These terms appear in navy blue font. An explanation can be seen by clicking on any item. A gazetteer has also been provided to explain lesser-known locations. Place names in navy blue font are also clickable for a simple explanation of their location relative to better known cities and towns.

Outlined below are the main elements of a typical account, listed in order of appearance.

Species names are provided in English and French, and the scientific name, following the American Ornithological Society Checklist of North and Middle American Birds, up to the 57th supplement (2016).

This feature opens by clicking the box at the top right of the account. The fact box summarizes at-a-glance pertinent information for each species including sample sizes, conservation status (in 2017), and population trends (if available, with a clickable link to the source of this information). 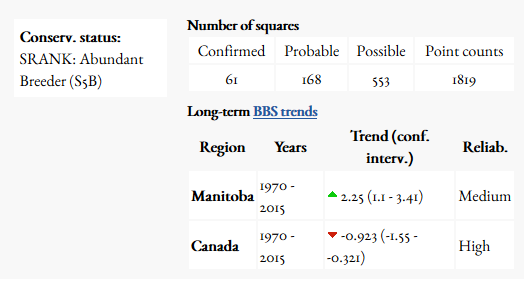 To the right of the species fact box are buttons to open bar graphs and tables that show, where sufficient data exists, the mean abundance by Bird Conservation Regions (BCR) and the percentage of surveyed squares in each BCR in which the species was detected. You can view this in tabular form or click on the plot links to view bar charts. The paler bars indicate that the sample size is very small (i.e. the species was recorded on very few point counts or found in only a few squares within the BCR in question). Clicking on the plot again will return you to the tabular version.

Up to three maps may be presented for each species, depicting: i) breeding distribution, ii) relative abundance, and iii) probability of observation.

i) Breeding distribution maps are shown for every species, whereby darker shades of orange indicate higher levels of breeding evidence. Grey squares are those where some survey effort occurred but the species was not recorded. A grey-coloured square does not necessarily reflect a true absence; it may simply mean that relatively little survey effort occurred in that square.

ii) Relative abundance maps are presented for 182 species. On each relative abundance map, the highest category (darkest shade, usually red) represents the top 10% of predicted relative abundance values. Thus, the darkest area on each map shows where one would expect the species to be most abundant. The remaining 90% of values are divided into five or fewer categories with successively lighter shades representing half of the abundance of the previous level. The specific levels are derived separately for each species, so the category values are different for each species. Thus, one should be careful in making comparisons between species without considering the legend values. The analysis and mapping section describes how these data were analyzed.

iii) Probability of Observation maps are presented for 238 species. These maps show the predicted chance of finding each species across the province after 20 hours of survey effort during the breeding season, on a scale of 0.0 to 1.0 (0% to 100% chance), with darker colours indicating a higher likelihood of finding it (a higher probability of observation). The probability of observation maps are especially useful for identifying core areas of a species' range and for 'smoothing out' breeding distribution records. Again, more detail can be found in the analysis and mapping section.

The distribution map is the default option that shows up in the large box below the thumbnail icons. Move your cursor over the relevant thumbnail icon to have the map of your choice appear in the larger box below, and then click on that larger box for a full-size version of the map you are interested in. Press the F11 key on your keyboard to best view the map (in full screen mode); when you are done, press F11 again to return to the normal viewing mode.

A menu bar at the top of the map provides a series of labelled overlay options to assist users in interpreting the maps. These are: Atlas administrative regions, Bird Conservation Regions, 10,000-km2 blocks, Latitude/Longitude grid lines, and cities and roads. Click the box by one or more of the layers to overlay them on the maps. Enjoy exploring the map patterns by ecological, geographic, or administrative region. There is a great deal to be learned here; if you notice a pattern that is not described in the species account, do please let us know at the e-mail address below!

The 300-550 word texts are divided into three sections that: i) introduce the reader to the bird; ii) describe the atlas results in the context of conventional knowledge; and iii) frame and discuss any conservation issues and provide recommendations. In these texts authors, often refer to Bird Conservation Regions. Bird Conservation Regions (or "BCRs"; Bird Studies Canada and NABCI 2014) are landscape units that are relevant at the continental scale rather than pertaining to political boundaries. BCRs are a common currency used by conservation practitioners throughout Canada, the United States and Mexico. BCRs are scaled up further into biomes, which are sometimes referred to when describing the continental range of a species.

This section sets the scene for each species, establishing the reader's familiarity with the bird by describing what makes it distinctive, summarizing where it occurs worldwide, and how Manitoba fits into that broader context. Wherever possible, ecological terms are used rather than political ones (e.g., province or state names), because they more effectively convey the factors potentially influencing a species' distribution.

This section summarizes the atlas five-year snapshot for these three related subjects. Distribution is described very generally using recognized geographic features and Bird Conservation Regions. A comparison is often made between the atlas results and the range as estimated in The Birds of Manitoba (2003). This leads into a description of what additional detail the relative abundance and probability of observation maps tell us about the bird's distribution and where it may be most common. For species with sufficient data collected on atlas point counts, the text then describes where their main centre(s) of abundance are.

This section focuses on the new information the atlas has provided since The Birds of Manitoba was published in 2003. Authors describe where there have been changes in range (distribution). Authors may suggest explanations for the pattern of distribution, abundance and habitat use, often using BCRs or landscape features. As you explore the species accounts, it will become apparent just how many birds' distributions hug the BCR boundaries.

Brief descriptions of the broad habitat(s) in which each species was found during the atlas are presented along with the finer habitat features that species appeared to prefer, based on the habitat descriptions documented by atlassers on rare and colonial forms, author and atlasser field observations, and/or from information published elsewhere.

Where relevant, this section summarises the factors behind each species' conservation status designations, any changes in status since the atlas began, conservation issues in relation to atlas findings, and recommendations for further survey work, analyses, or conservation actions.

References have been compiled for all accounts and are available here.

The recommended citation structure for individual species accounts is:

For example, it is suggested that the Northern Parula account be referenced: