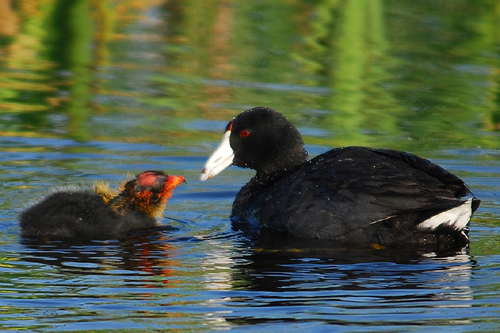 Characteristics and Range The American Coot is a member of the rail family but much more conspicuous than most rails because it habitually swims and dives in open water. It has a bone-coloured bill, red eyes, black body, and white undertail coverts. Its loud clacking calls are often heard in wetlands with emergent vegetation. The American Coot has a vast distribution across North America. Northern (migratory) populations nest from British Columbia across the Prairie Provinces to southern Ontario, Québec, and some parts of the Maritime Provinces, and south to Utah and Missouri. Breeding also occurs locally north to Alaska, Yukon, and Northwest Territories. South of this range, breeding and wintering areas overlap in much of the western conterminous U.S.A. as well as Florida and parts of Middle America and South America. Wintering also occurs along the Pacific coast as far north as the Alaska Panhandle, and the remaining areas of North America excepting the Appalachians (Brisbin et al. 2002).

Distribution, Abundance, and Habitat Much as depicted in The Birds of Manitoba, the American Coot was found nesting throughout the Prairie Potholes and the Boreal Taiga Plains as far north as The Pas. The distribution was more localised within the Boreal Hardwood Transition as far east as Pinawa and Sprague. Nonetheless, there were very few records around the shores of Lake Winnipeg, except the extreme southern portion of the lake, and no detections in the Boreal Softwood Shield. There was one extralimital record in Churchill, where this species has bred at least twice, in 1935 and 1980 (The Birds of Manitoba). The American Coot was especially abundant in the western Prairie Potholes with a lesser centre of abundance around Lake Manitoba. Abundance declined east of the Arden Ridge and north of Riding Mountain. The probability-of-observation analysis shows a very similar pattern. There may be a link between the high abundances recorded in this core range and the limited number of detections in the central Interlake and in eastern Manitoba. These peripheral areas tend to see higher occupancy when conditions in the Prairie Potholes are drier. High precipitation levels over the past two decades, including all five years of the atlas period, have swollen many ephemeral wetlands and stimulated vegetation growth around their edges. Recent high late-season counts, including 6,722 American Coots at Whitewater Lake on August 6th, 2017 (Manitoba Important Bird Area Program), are a good indication of this abundance. The American Coot nests semi-colonially in a variety of waterbodies from roadside ditches to lakes. In Manitoba, it prefers marshes and "semi-permanent potholes" with moderate cover of cattails and bulrushes (Brisbin et al. 2002, The Birds of Manitoba).

Trends, Conservation, and Recommendations Aerial surveys and BBS data combined suggest a population of around 3 million breeding American Coots in Canada and the U.S.A (Brisbin et al. 2002). Long-term BBS data suggest that numbers are generally stable across Canada and within Manitoba. This species' preference for a wide range of aquatic habitats has certainly contributed to its success and current abundance. Wetland conservation initiatives within the Prairie Potholes will continue to benefit this species.