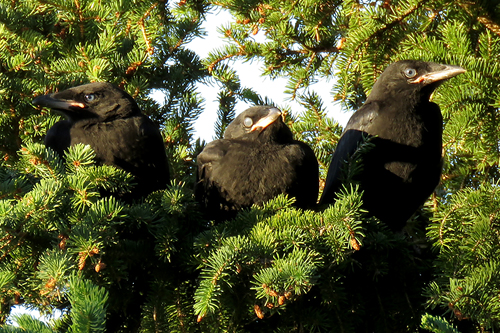 Characteristics and Range Common, widespread, and conspicuous, the all-black American Crow needs no introduction. It might be mistaken for the Common Raven, but it is considerably smaller, with a shorter beak and a more rounded tail, and it has different vocalizations and habitat preferences. It breeds from the treeline in the Northwest Territories across the continent to Labrador and Newfoundland, through southern Canada (except the Pacific coast) and virtually the entire conterminous U.S.A., except for some areas in the extreme southwest (Verbeek and Caffrey 2002). Most breeders in Canada migrate south for the winter; those in the Prairie Provinces in a narrow corridor from South Dakota to Oklahoma and Texas (Brewer et al. 2006). Increasing numbers have remained to winter in southern Manitoba in recent decades, primarily in urban centres, but also in rural settings.

Distribution, Abundance, and Habitat The species was found throughout the province, except perhaps the extreme northeast corner (not found in 17 well-surveyed squares), with detections in 96% and 92% of surveyed squares in the Prairie Potholes and Boreal Hardwood Transition respectively, and gradually diminishing percentages towards the north. The probability of observation was highest in the southwest, again diminishing towards the north. The relative abundance was highest in the southern Interlake and in the area between southern Lake Winnipeg, the city of Winnipeg, and the region west and southwest of Lake Manitoba including Brandon.

The species occupies a variety of habitats, especially in open landscapes with scattered trees and small woodlots. Clearing of hardwood and coniferous forest and planting of trees around homesteads and in urban centres has created additional habitat. As a result of this the American Crow is now more abundant than when the first European settlers arrived. Its omnivorous diet has also allowed the species to thrive (Verbeek and Caffrey 2002).

Trends, Conservation, and Recommendations Heavily persecuted well into the 20th century, which made the species shy, the American Crow has since found relative safety in cities and towns, and shooting in general has decreased (Verbeek and Caffrey 2002). West Nile Virus has periodically taken a toll on crows (and other corvids) in Manitoba (e.g., in 2006, CBC data). BBS results for Manitoba and Canada show no significant long-term or short-term trend. Nonetheless, an increasing number of American Crows overwintering in Manitoba and CBC data indicate an increase from 0.2 birds per party-hour in 1990 to 1.2 in 2015, with a dip in 2006 when numbers were halved, presumably due to West Nile Virus.