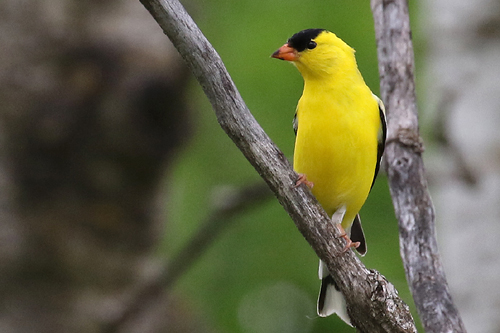 Characteristics and Range The breeding male American Goldfinch, often called "wild canary" by non-birders, has an unmistakable combination of bright yellow body, black wings, tail and forehead, and white tail-coverts. Female and non-breeding plumages are mostly brownish with bold, pale wingbars and usually at least a tinge of yellow. Lively, musical songs and flight calls are often the first sign of goldfinches' presence. The breeding range extends across southern Canada and much of the conterminous U.S.A., excluding the southern Coastal Plain and parts of the arid southwest. According to BBS analysis, southern Manitoba is at the western end of the zone of peak abundance, which arcs across the northeastern U.S.A. and southeastern Canada. Its winter range indicates withdrawal from northern areas (though some American Goldfinches now overwinter in southern Manitoba), with movements southward to peninsular Florida and northern Mexico, but only casual occurrence in the Caribbean (McGraw and Middleton 2017).

Distribution, Abundance, and Habitat Though largely restricted to the Prairie Potholes and southern boreal forest, the American Goldfinch was one of the most frequently detected passerines in the atlas fieldwork, with observations on over 5,000 point counts. There is close correspondence between the detection, relative-abundance, and probability-of-observation maps, though the relative abundance is highest in two zones near Minnedosa and Winnipeg, straddling the boundary between the Prairie Potholes and Boreal Taiga Plains. Whereas goldfinches were frequently encountered north to the limit of the Boreal Taiga Plains (well north of the limits suggested by The Birds of Manitoba and McGraw and Middleton (2017), they were scarce in all but the extreme south of the Boreal Softwood Shield. A few far-northern reports were excluded because of possible confusion with redpoll calls, and Jehl (2004) cites just one Churchill record. The atlas distribution reflects a preference for nesting in young or shrubby deciduous growth and an affinity for human habitation, especially parks, gardens, and wooded farmyards. Weedy fields and "waste ground" with abundant seed-bearing thistles or other composite-flowered plants (Asteraceae) are important food sources. As nesting often commences in July, after the peak point-counting period, it is possible that the atlas distribution dœs not correspond exactly to the nesting distribution, but any errors are thought to be slight. American Goldfinches are gregarious throughout the year, and nesting is sometimes semi-colonial (McGraw and Middleton 2017).

Trends, Conservation, and Recommendations Being common, widespread, and probably an overall beneficiary of European settlement, the American Goldfinch is not a species of global or regional conservation concern. Only slight broad-scale declines have been detected by BBS analysis. Nevertheless, this popular little finch is sensitive to some agricultural chemicals and to intensive practices such as weed eradication, predators (notably domestic cats), and several other anthropogenic hazards (McGraw and Middleton 2017). Suggested beneficial measures include less zealous weed control, planting of native herbaceous species in urban environments, and conservation of river bottomlands, flood plains, and open early-successional habitat (McGraw and Middleton 2017).