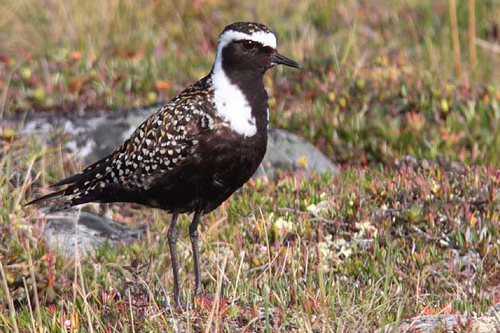 Characteristics and Range The sleek and elegant American Golden-Plover is the only dark-bellied plover species that breeds in Manitoba, although the larger and more robust Black-bellied Plover occurs as a passage migrant. Its intricate, gold-and-black plumage is at once striking and superb camouflage for its dappled tundra breeding grounds, where it is often first detected by its repeated two-note whistle, rendered as tuusiik in Inuktitut. This plover is an extreme long distance migrant, breeding across the North American Arctic and subarctic tundra, from Baffin Island to Alaska (with limited overlap of the breeding range of the Pacific Golden-Plover), and wintering in the grasslands and wetlands of the southern cone of South America.

Distribution, Abundance, and Habitat The American Golden-Plover breeds within a relatively narrow coastal band of the Hudson Bay Lowlands and inland along the Nunavut land border (The Birds of Manitoba); however, no individuals were detected in atlassing east of the Nelson River, nor west of Courage Lake. In Manitoba, this species is most commonly found on well-drained, rocky sites, often on raised eskers, beach ridges and the rocky tops of steep river banks, although it can occur in coastal fens and wetter areas. The probability of observation and relative abundance maps fail to capture the easternmost portion of the breeding range in Manitoba, where open upland habitat is patchy. Relative abundance was highest along the beach ridge areas of Wapusk National Park, generally decreasing towards the treeline, and in the raised topography of the central far north from Schmok Lake west to the Robertson Esker.

Trends, Conservation, and Recommendations The American Golden-Plover narrowly avoided the fate of the Eskimo Curlew in the market hunting era, when as many as 48,000 were shot in a single day (Johnson and Connors 2010). The massive migratory flocks passing through southern Manitoba that once earned this species the nickname "prairie pigeon" now typically number only a few dozen (The Birds of Manitoba). Despite rebounding well in the 20th century, the American Golden-Plover has still not reached its former population levels, nor dœs it seem likely to do so. This species is pressured by habitat loss on the wintering grounds, ongoing hunting along its migratory pathway (especially in the Caribbean Basin), and perhaps other threats (Johnson and Connors 2010). The American Golden-Plover is ranked as high priority in both the U.S. Shorebird Conservation Plan (Brown et al. 2001) and the Canadian Shorebird Conservation Plan (Donaldson et al. 2000) and has its own conservation plan through the Western Hemisphere Shorebird Reserve Network.