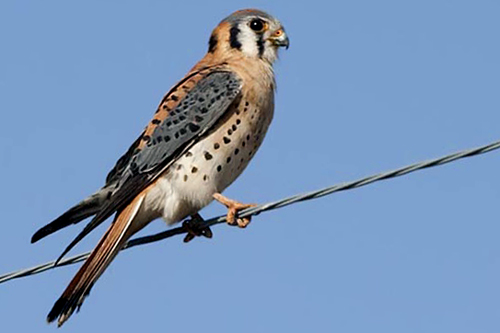 Characteristics and Range North America's smallest falcon is a familiar sight in Manitoba, as it is frequently seen hunting large insects and small rodents from roadside wires and posts, or hovering over open areas in search of prey. American Kestrels breed throughout the Americas, as far north as the treeline and south to Patagonia, but they are absent in the Amazon Basin (Smallwood and Bird 2002). In Manitoba, they are primarily summer residents with very few overwintering birds. The winter range is chiefly from the central U.S.A. south, with populations from northern locations such as Manitoba migrating as far south as Central America and the Caribbean (Smallwood and Bird 2002).

Distribution, Abundance, and Habitat The distribution map shows that there has been no significant change in the kestrel's range since the publication of The Birds of Manitoba. Its range essentially includes the entire province to the treeline. Highest densities were found in the Prairie Potholes, the Boreal Hardwood Transition (especially agricultural portions), and the Boreal Taiga Plains, with low numbers in the Boreal Softwood Shield. These regions provide the preferred habitats of lightly wooded marginal farm and pasture land, roadsides, old burns, and open woodlands. Kestrels are reliant on tree cavities for breeding in these habitats, especially old Northern Flicker nest holes, but holes in telephone poles and buildings are also used. Densely forested areas are unsuitable, presumably due to lack of open hunting areas rather than a lack of cavities, perhaps explaining their lower relative abundance and probability of observation in northern portions of their breeding range. Because kestrels are conspicuous, the atlas maps accurately reflect distribution and abundance.

Trends, Conservation, and Recommendations Although the distribution of the American Kestrel has not significantly changed in the past 14 years, the general decline in abundance as described in The Birds of Manitoba has continued. BBS data show significant long-term annual declines in Canada and in Manitoba and even steeper short-term declines. Lack of food during the breeding season (mainly grasshoppers and other large arthropods) is likely the primary contributing reason (Smallwood and Bird 2002). Numbers have declined in agricultural areas in southern Manitoba as land use has changed to monoculture, while in larger cities, such as Winnipeg, the kestrel has become a rare breeder perhaps due to increased competition from Merlins and a decline in available cavities. Kestrels have also become rare in the Churchill region, for reasons that are unclear. Recent evidence points to contamination from flame retardants as having similar effects to DDT in compromising reproduction (Fernie et al. 2009, Marteinson et. al. 2012).

Given the continued wet cycle the province has been experiencing for the past two decades and the ongoing loss of marginal farmland, it appears highly unlikely that kestrel numbers will rebound anytime soon in Manitoba. A return to drier conditions might favour this species; climate change models predict wetter springs with drier, hotter summers (Prairie Climate Atlas 2016), although the impact on kestrels is difficult to predict. In areas where nesting habitat is limited, provision of nest boxes for breeding could aid in recovery of populations as the species readily accepts artificial sites.