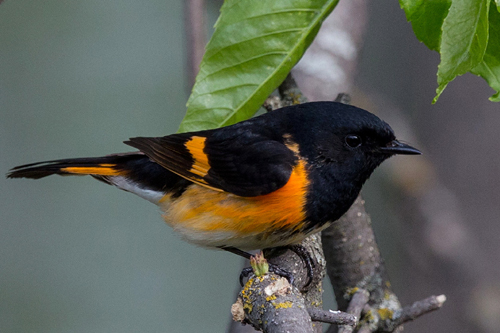 Characteristics and Range The adult male American Redstart's black-and-orange plumage suggests a miniature oriole. Bold orange patches on the wings, tail, and flanks are made all the more conspicuous by frequent wing-drooping and tail-fanning behaviour, often at eye level and frequently described as butterfly-like. Females and immature males have a similar but muted pattern in grey, yellow, and olive-green. The species has a confusing variety of songs, many of which resemble those of other wood-warblers. The breeding range spans Canada from southern Yukon to Newfoundland, southward to much of the eastern U.S.A. and parts of the northwestern conterminous U.S.A. There are many voids, irregularities, and outlying populations, especially near the southern edge (Sherry et al. 2016). The winter range includes northern South America, Central America, southern parts of Mexico, and the Caribbean.

Distribution, Abundance, and Habitat Atlas square detection was highest in the Boreal Taiga Plains and Boreal Hardwood Transition, followed by the Prairie Potholes, and markedly lower in the Boreal Softwood Shield, and minimal in the Taiga Shield & Hudson Plains. Peak abundance was found in the central Interlake and along the Manitoba Escarpment, with somewhat lower numbers in adjacent regions and a broad zone east of the Red River, and low abundance both in intensive agricultural regions and the northern boreal forest. Probability of observation shows a similar pattern, but with less emphasis on the central Interlake and more on eastern Manitoba (generally west of the Canadian Shield).

At a local level, the American Redstart is extremely patchy in occurrence, with small areas of high abundance generally in deciduous-dominated woodland with a well-developed understory of mountain maple, beaked hazel, or other tall shrubs. Such localities include parts of the boreal-parkland transition, the Manitoba Escarpment, and the north shore of Lake Winnipegosis. Some regions of peak abundance experienced major defoliation by forest tent caterpillars during the atlas period, but this may be coincidental or related to increased detection rather than enhanced food supply. A New Hampshire study showed that competition with the Least Flycatcher has an important influence on local distribution of the American Redstart (Sherry and Holmes 1988). Other studies point to the importance of early-successional habitat for this species (e.g., Hunt 1998), but some prime localities in Manitoba are in partly open, mature riparian woods (pers. obs.).

Trends, Conservation, and Recommendations Analysis of BBS data shows population declines mostly in eastern and western portions of the range, but increases in a broad band from Manitoba and eastern Saskatchewan to the Gulf coast. Overall, Canadian numbers are stable and only a slight decline is detectable in the U.S.A. As with any long-distance migrant, multiple factors may affect American Redstart numbers (Sherry et al. 2016), habitat change in the Caribbean being one of particular concern, but specific conservation and management regimes are not currently a high priority for this species.