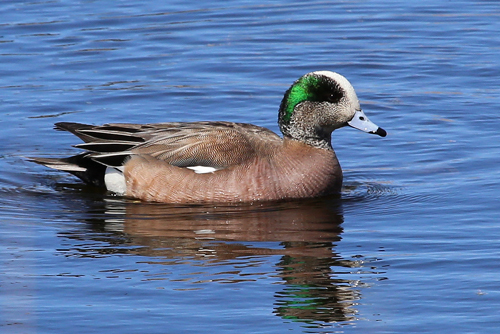 Characteristics and Range The American Wigeon is a medium-sized dabbling duck with a small bill (adapted for grazing rather than filter feeding) and steep forehead. The old name "Baldpate" refers to the breeding male's white forehead and crown; he is also distinguished by a broad, iridescent green, eye-to-nape stripe and pinkish-brown flanks. The mostly grey-brown female has a reddish-brown breast and flanks. In flight, males show conspicuous white forewing patches (muted in the female). The breeding range extends from Alaska to Manitoba, with smaller numbers eastward to the Maritimes and southward to include much of the interior western U.S.A. as far as Colorado and northern California. The winter range spans the Pacific coast from Alaska to Panama, eastward across the southern U.S.A. and most of Mexico, and the northern Caribbean islands (Mini et al. 2014).

Distribution, Abundance, and Habitat Atlas detection was patchy and not easily described in terms of BCRs. The highest density of occupied squares was in the southwestern portion of the Prairie Potholes, which is near the southeastern corner of a core breeding area from central Alberta through Saskatchewan to northwestern North Dakota (Baldassarre 2014). Other areas of frequent detection include the southern Interlake, parts of the boreal forest north of Lakes Winnipeg and Winnipegosis, and the Hudson Bay coast. Elsewhere, scattered records indicate almost province-wide occurrence at low densities. The apparent absence from the extreme northern interior is surprising, because published breeding-range maps indicate occurrence well into Nunavut (Baldassarre 2014, Mini et al. 2014).Breeding habitat includes a wide variety of wetland settings from prairie ponds to boreal marshes and tundra pools, with drier, grassy or brushy areas to provide nesting cover nearby. After the breeding season, moult migration in the American Wigeon varies from local shifts of a few kilometres to long-range northward movements (Baldassarre 2014, Mini et al. 2014). The wide distribution of confirmed breeding records suggests that the atlas results are not strongly influenced by moult migration.

Trends, Conservation, and Recommendations Analysis of BBS data shows significant long-term declines range-wide and in all three Prairie Provinces, although this seems to be at least partly offset by increasing numbers breeding in Alaska and Yukon (Baldassarre 2014), where BBS coverage is poor. Continental waterfowl surveys showed a population low in 1986, with some recovery and relatively stable overall numbers since the 1990s, albeit with shifts and fluctuations associated with wet/dry climatic cycles and changing patterns of land use (Baldassarre 2014, Mini et al. 2014). In southeastern Manitoba, the general impression is of markedly reduced numbers, both breeding and in migration, since the early 1980s (Taylor 1983, pers. obs.). There is little information on specific management measures, but the conservation of prairie and boreal wetlands, plus associated upland nesting cover, is clearly important for this species among many others.