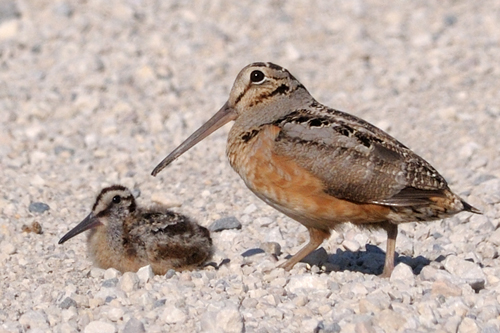 Characteristics and Range Due to its crepuscular habits, the American Woodcock often gœs unnoticed. At dusk and dawn, and throughout a clear night around full moon, when males perform their aerial display known as roding, it becomes evident that this chunky shorebird is more common than generally thought. About the same size as Wilson's Snipe but more heavily built, it can be distinguished by its peach-coloured underparts, short legs and long, pink-based bill. The breeding range stretches from southern Manitoba in the west to Newfoundland in the east, and south to eastern Texas and Florida, with wintering taking place primarily in the southern half of the breeding range (McAuleyet al. 2013). It is likely that occasional breeding has taken place in Saskatchewan (Hooper 1992).

Distribution, Abundance, and Habitat The American Woodcock was found in a broad diagonal band from southeastern Manitoba mostly east of the Red River (absent south and west of Glenboro - Minnedosa) through the Interlake to the vicinity of The Pas. The area occupied from Grand Rapids to The Pas is >250 km north of the range limit depicted in McAuley et al. (2013) and >150 km farther north than shown in The Birds of Manitoba, especially in the west, as foreshadowed by the latter publication. The probability of observation was highest along the ecotone that comprises the border of the Boreal Taiga Plains with the Boreal Hardwood Transition and the southern Boreal Softwood Shield, and dropped off sharply both southwest and northeast of this band. The high probability-of-observation values in the southern Interlake are an artifact of intensive search efforts by a few observers. Preferred habitat consists of shrubland or young deciduous or mixed forest, interspersed with openings and edge habitat, such as grassy roadsides, old fields and pastures. In Manitoba, the American Woodcock is particularly abundant in areas where trembling aspen dominates (boreal-parkland transition), especially young woodlands or forest with openings and with deep leaf litter and humus (pers. obs.). In optimal habitat, a dozen or more displaying birds may be detected in one or two hours.

Trends, Conservation, and Recommendations Hunting pressure has diminished in the past few decades, with ~200,000 birds harvested in North America in 2016-2017 as compared to ~2,000,000 annually in the 1970s (Seamans and Rau 2017), although a season has recently been opened in Manitoba. The American Woodcock Singing Ground Survey has documented a declining population, particularly in the woodcock's eastern range, owing to natural succession of habitat and changing forestry practices (McAuley et al. 2013, Seamans and Rau 2017). The only jurisdiction that shows a significant long-term (1968-2017) increase is Minnesota; both long-term and short-term increases in Manitoba are not statistically significant (Seamans and Rau 2017). This shorebird is susceptible to heavy-metal accumulation and can suffer eggshell thinning from certain pesticides, but loss of early-successional habitats is likely a driver of the observed declines (McAuley et al. 2013).