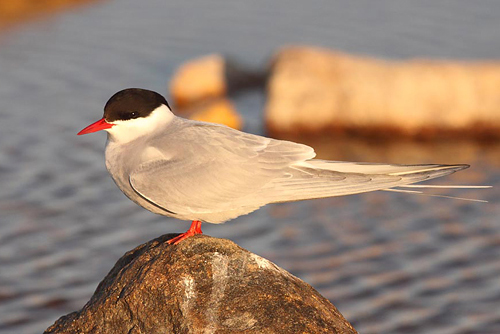 Characteristics and Range The Arctic Tern is famous as the species of bird with the longest annual migration, breeding across much of the northern half of the Northern Hemisphere and wintering in Antarctic waters. Like the similar Common and Forster's Terns, it has long, narrow wings and a deeply forked tail, with white and grey plumage and a black cap. Differences from the other species include a darker grey abdomen, a short coral-red bill lacking a dark tip, and even shorter legs. Arctic Terns breed throughout much of the northern half of the Northern Hemisphere; in North America this is from the islands of the High Arctic south to northern British Columbia and the extreme north of the Prairie Provinces to Newfoundland and coastal New England (Hatch 2002).

Distribution, Abundance, and Habitat The Arctic Tern was found nesting in the extreme north of Manitoba, from the lower Gods and Hayes Rivers through Wapusk National Park and Churchill north along the Hudson Bay coast and inland to several of the large lakes near the Nunavut border. The Gods River birds were south of the range plotted in The Birds of Manitoba, but otherwise the distribution was similar to that shown in that reference. Probability of observation and relative abundance were high in the above areas, generally decreasing with distance inland and much lower at the inland lakes. The high probability of observation east of Cape Tatnum to the Ontario border is inflated as there were no surveys along this stretch of coastline. Occupancy diminished from 80% of squares in the Arctic Plains & Mountains to 31% in the Taiga Shield & Hudson Plains . Nests are dispersed in the tundra or in small colonies on islands in lakes or large colonies on coastal islands. Food consists of small fish, crustaceans and other invertebrates, obtained by hovering and diving at breeding ponds or nearby larger bodies of water.

Trends, Conservation, and Recommendations The species suffered in the 19th century plume trade, but then recovered. Recently there have been declines in New England and Greenland (Hatch 2002). This tern's population status is poorly known, principally because of the remote nesting and overwintering areas, but given its enormous circumpolar range it is not considered a conservation concern. Arctic Terns are long-lived: one banded as a chick at Churchill in 1937 was shot there in 1965 at 28 years of age (Gaston et al. 2008). This species may be vulnerable to the accumulation of contaminants, and it showed the highest accumulated levels of DDT of 11 species studied at Churchill (Brown and Brown 1970), although there is no clear evidence of population-level effects (Hatch 2002). Climate change poses a potential threat, as it may alter nesting habitat and food supply. Other threats, perceived as either minor or of unknown impact, include egg-harvesting, over-fishing, environmental contaminants, and habitat degradation (Hatch 2002).