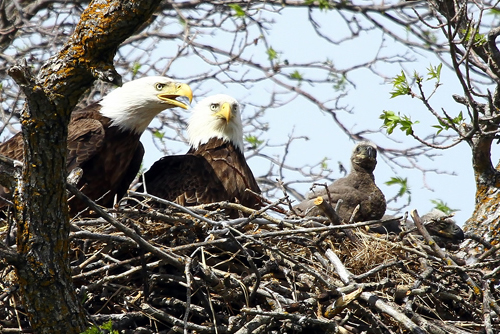 Characteristics and Range Almost every North American is familiar with the Bald Eagle, at least from images if not from life. Adults are easily recognized by the white head and tail in combination with the dark brown body, but immature birds (up to 3 years of age) are more difficult to identify; indeed, they are often mistaken for Golden Eagles.The Bald Eagle breeds across the boreal, montane, and forested coastal regions of North America, extending south around the Great Lakes, and it is increasingly, albeit disjunctly, re-occupying the conterminous U.S.A., especially where rivers and large water bodies are surrounded by woodlands. It is primarily a summer resident in Manitoba, arriving as early as February and departing mainly through November and December. Although its wintering distribution is generally tied to the presence of open water, increasing numbers winter in southern Manitoba, attracted by roadkill, offal from hog and poultry farms, injured waterfowl (locally), and some rural landfill sites. Although birds banded in Manitoba have been recovered in Texas and Virginia, most of our population probably winters from Minnesota and the Dakotas south to Missouri (Dunn et al. 2009).

Distribution, Abundance, and Habitat Bald Eagles breed throughout the province, with greatest densities found in the Boreal Taiga Plains and Boreal Softwood Shield. Increasingly the southwest of the province (Prairie Potholes) is being occupied, as is the far north. These breeding range extensions are relatively recent and documented by comparison of atlas results with the ranges described in Koes (2010) and The Birds of Manitoba (2003). Some squares where birds were recorded in suitable habitat may involve non-breeders or birds ranging far away from the nest. The former appears to be particularly the case along the Hudson Bay coast, where few nests were found but adults were frequently observed. The Bald Eagle is a common breeder in Manitoba. Numbers have undoubtedly increased substantially from the 1300 breeding pairs estimated to be in the province during the early part of the 21st century (The Birds of Manitoba). Nests are found along rivers, along the shores of lakes of various sizes, and occasionally well away from water. The highest relative abundance was found around Lake Winnipeg. The nests are usually constructed in mature live trees, either deciduous or coniferous, although the occasional dead tree may also be used. These structures may be used for many years, sometimes for decades, and they continue to grow in size as the adults add nesting material.

Trends, Conservation, and Recommendations The saga of the Bald Eagle's decline and subsequent recovery, following the ban on DDT and other persistent pesticides and protection under the U.S. Endangered Species Act, is almost as well known as the bird itself. The Bald Eagle is currently thriving and there appear to be no reasons for concern in the near future, although high mortality from human causes still poses a threat and requires monitoring (e.g., Scott and Bollinger 2015). It is expected that the number of breeding pairs in Manitoba will continue to increase, at least until the carrying capacity is reached.