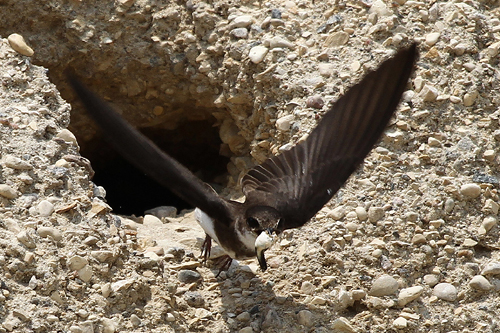 Characteristics and Range This small, highly colonial swallow is distinguished by a combination of brown upperparts and a dark breast-band on otherwise white underparts. Its vast breeding range includes much of Europe, Asia, and North Africa as well as North America. In Canada, it is absent only from coastal and northern British Columbia, Arctic regions, and parts of Newfoundland and northwestern Alberta. It also breeds through most of the northern U.S.A. and locally southward to Texas. The winter range for North American breeders includes much of South America, northward to the Pacific coast of southern Mexico (Garrison 1999).

Distribution, Abundance, and Habitat Atlas records extend throughout Manitoba, including scattered observations north of the previously estimated range limit (The Birds of Manitoba) to the Nunavut border. The highest concentrations of occupied squares were within the Prairie Potholes region and, unexpectedly, along the Hayes, Owl, and lower Nelson Rivers in the Hudson Bay Lowlands, where long sections of steep, exposed banks provide an excellent breeding substrate. The peak in probability of observation in the latter region is doubtless accentuated by river-based surveys. The point-count protocol is not ideal for estimating abundance of highly colonial species, and more information is needed on individual colony size and distribution in Manitoba.

Sightings were scarce in most of the boreal forest, especially the Boreal Softwood Shield, reflecting the scarcity of nesting banks and possibly also limited foraging habitat. An exception is the lower Winnipeg River, where eroding river banks and nearby pastureland and other open areas combine to provide suitable summer habitat. Colonies exist along many rivers draining the Manitoba Escarpment towards Lake Manitoba and Dauphin Lake, and along creeks and rivers farther southwest. Artificial breeding habitat exists at sand and gravel pits and stockpiles across southern Manitoba and northward in a few locations near highways.

Trends, Conservation, and Recommendations The Bank Swallow is designated Threatened in Canada because BBS data indicate nationwide population loss since 1970, with the highest losses in the east (COSEWIC 2013). There is also a significant long-term decrease in Manitoba (BBS data). Multiple, poorly understood threats are thought to be responsible for the declines, one important factor being the destruction of nests during excavation at aggregate pits (COSEWIC 2013). This is aggravated by the Bank Swallow's preference for pits in operation over inactive ones, presumably because freshly cut, vertical surfaces in the former are available for nest-burrow excavation. The Ontario Recovery Strategy for this species identifies (among other recommendations) the need to develop best management practices to minimize nesting losses at aggregate pits, and also at shoreline projects involving erosion control (Falconer et al. 2016). Given the significant use by Bank Swallows of waterfowl nesting/resting islands at Oak Hammock Marsh (pers. obs.), attention could be given to the design of artificial islands at waterfowl projects in general. Despite the foregoing concerns, migrant concentrations in the thousands can still be observed in southern Manitoba, notably near Whitewater Lake, the Shoal Lakes, and Delta Marsh, though these sometimes result in substantial road casualties.