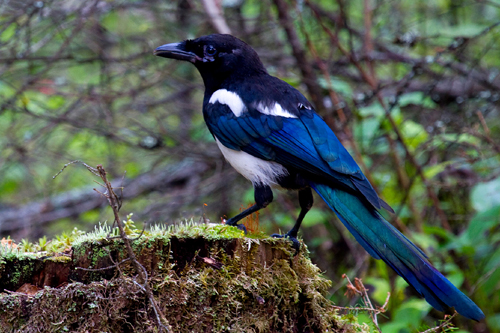 Characteristics and Range The Black-billed Magpie is a distinctive black-and-white crow-relative with a long tail. In good light the black feathers show green, purple and blue iridescence. When perched, the white of the plumage seems restricted to the scapulars and abdomen, but in flight the bird also shows much white in the primaries. Both sexes are alike. The Black-billed Magpie is a year-round resident of western North America, ranging from Alaska to northwest Ontario and south through the Rockies and Great Basin to easternmost California and northern Arizona and New Mexico (Trost 1999). Although magpies do not migrate, they may vacate their nesting territories and form flocks in fall; in winter they often congregate at waste disposal sites, feedlots, and farm yards. The North American Black-billed Magpie was considered conspecific with the Common Magpie (Pica pica) of Eurasia until 2000.

Distribution, Abundance, and Habitat Black-billed Magpies were found primarily west and south of an arc from southeastern Manitoba, through Pinawa, along Lake Winnipeg, and to The Pas. Within this area, they were notably scarce in the boreal uplands of the Manitoba Escarpment and in parts of the northern Interlake. They were not recorded in northern Manitoba, with the exception of two isolated records near Thompson (Paint Lake and west of Phillips Lake). Isolated clusters around human settlements were found at Grand Rapids, Berens River, and Poplar River. Magpies were particularly widespread in the south, being found in 84% of surveyed squares in the Prairie Potholes, 52% of the Boreal Hardwood Transition, and 42% of the Boreal Taiga Plains, as compared to only 2% of the Boreal Softwood Shield. The percentage of confirmed breeding records is very high, as nests are conspicuous. Relative abundance decreased eastward, being highest west of the Manitoba Escarpment from the Pembina River valley to The Pas, and west of the lower basin of Lake Winnipeg. The probability of observation was highest in the southwest, particularly in the Assiniboine River valley and vicinity, and also around the southern basin of Lake Winnipeg and the Red River valley. Magpies are found in a variety of habitats, from farmland to suburban areas, and small towns to forest edges. They are absent from dense forest (the majority of boreal forest sightings being close to communities) and also have not penetrated Winnipeg's inner city.

Trends, Conservation, and Recommendations The Black-billed Magpie suffered major losses in the Northern Great Plains with the eradication the bison, disappearing from Manitoba entirely until ~1910, and re-establishing after 1921 (The Birds of Manitoba). Numbers increased steadily until the 1980s (The Birds of Manitoba), but then began declining, resulting in the appearance of stability in Manitoba and slight declines in Canada overall since 1970 (BBS data). Prior to the 1950s there were no CBC records for Winnipeg, and it was not until 1967 that the species became a regular feature of the count. Numbers on Manitoba CBCs increased steadily until peaking in 2002 and then dropped dramatically, by more than 85% by 2008, before starting a gradual recovery. This drop was likely caused by West Nile Virus, first reported in Manitoba in 2002 (Government of Manitoba 2002). Many people are unhappy about magpie (crow-family) numbers and blame them for declines of songbirds that are as likely the result of habitat loss and other threats.