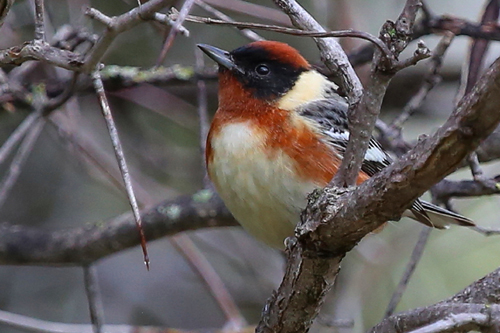 Characteristics and Range The male Bay-breasted Warbler in breeding plumage has a unique colour combination of rich chestnut in the crown, throat, and flanks coupled with a black face and buffy neck patches. Adult females are not as brightly coloured but still show a diffuse chestnut colouring on the throat and sides. The breeding range is a relatively narrow band across the southern and central boreal forest and the Boreal Hardwood Transition from southernmost Newfoundland and Maine to the southern Northwest Territories and northeast British Columbia (Venier et al. 2011). The winter range is small, from the lowlands and slopes of Costa Rica south to Panama and northwestern Colombia and Venezuela (Venier et al. 2011).

Distribution, Abundance, and Habitat The Bay-breasted Warbler was found throughout Manitoba's boreal forest to the northern edge of the Boreal Softwood Shield as described in The Birds of Manitoba, with two northern outliers in riparian forests on the Gods River near Shamattawa and the Hayes River near York Factory. Nonetheless, the core range, or at least the area with highest relative abundance, was a narrower band across the southern Boreal Softwood Shield and the central northern Boreal Taiga Plains. The relative abundance dropped sharply both north and south of this band such that the Boreal Hardwood Transition and the Riding Mountain National Park area showed very low occupancy. Even in the core areas, abundance was nowhere high, rarely exceeding one bird per 15 point counts, though it may be under-reported due to the difficulty of detecting and identifying this species' high-pitched song. In the Riding Mountain area, this species may nest mostly only during spruce budworm outbreaks. The Bay-breasted Warbler's uncommon status in Manitoba may be due in part to habitat preferences, especially for dense, mature coniferous or mixed woods, where it is strongly associated with balsam fir where present (P. Taylor, pers. obs.) or white spruce (pers. obs.), and often near water but infrequently in boggy sites (Venier et al. 2011) such as the ubiquitous black spruce and tamarack bogs of central Manitoba. Nonetheless, the Bay-breasted Warbler will sometimes nest in jack pine and in young mixed-wood stands during spruce budworm outbreaks (Venier et al. 2011).

Trends, Conservation, and Recommendations Despite population fluctuations tied to spruce budworm outbreaks, this species shows no significant long-term trend in Manitoba and Canada (BBS data). This is in part a consequence of increases in the western part of the range (including western Manitoba) and decreases in many eastern areas including eastern Manitoba (Sauer et al. 2015). This species needs large tracts of intact coniferous forests on its breeding grounds and there is evidence that forest fragmentation is detrimental to local populations (Venier et al. 2011). Reduction of mature coniferous forests due to shorter logging rotations in Canada will likely result in less favourable breeding habitat (Venier et al. 2011). There is also concern that wintering habitat degradation could become a serious problem as the forested areas required by this warbler are prized by land developers (Venier et al. 2011).