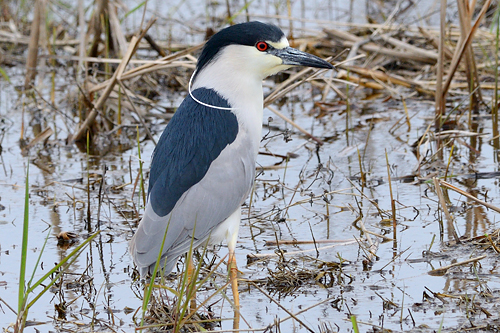 Characteristics and Range The Black-crowned Night-Heron is a medium-sized, stocky, crepuscular heron with a black back and crown on an otherwise grey body. Young birds are brownish and resemble bitterns, taking about three years to attain full adult plumage. The Black-crowned Night-Heron breeds on all continents except Australia and Antarctica, including much of the U.S.A. and parts of southern Canada, reaching its northern limit in the Prairie Provinces. Although no specific wintering locations are known for Manitoba breeders, it is likely that they, like Saskatchewan birds, migrate in a southeasterly direction (Dunn et al. 2009).

Distribution, Abundance, and Habitat This species is largely restricted to the Prairie Potholes as a breeder, and even here the distribution is spotty. Its preferred wetland habitat contains secluded nesting and roosting cover interspersed with more open foraging areas (Hothem et al. 2001). Nesting may take place in trees or shrubs, sometimes in mixed colonies with other herons and/or cormorants, or on the surface in extensive cattail or Phragmites beds. Roosting birds perch in low shrubs or trees near the water's edge.

The highest probability of observation was around the Shoal Lakes in the southern Interlake and in the vicinity of Whitewater Lake and Oak Lake in southwestern Manitoba. Traditionally reliable locations such as Delta Marsh, Oak Hammock Marsh, and Netley-Libau Marsh harboured few birds during the atlas period, presumably due to the habitat changes discussed below. Remote colony locations on Lakes Manitoba, Winnipeg, and Winnipegosis (Koonz and Rakowski 1985) were not visited during the atlas period, undoubtedly contributing to reduced overall counts and an apparent contraction of the breeding range. Estimating the overall abundance is difficult, given the species' crepuscular and nocturnal feeding habits, but night-herons can be quite common at their favourite haunts. Daily tallies of dozens of birds are still possible at Whitewater Lake and there is a historical count of 300 birds at Proven Lake (The Birds of Manitoba).

Trends, Conservation, and Recommendations Habitat loss due to changing water levels, either natural or human-caused, has had an impact on this species and is likely to continue doing so in the foreseeable future. At the Netley-Libau Marsh complex, open water has expanded greatly at the expense of emergent vegetation. At Oak Hammock Marsh and parts of Delta Marsh, cattails have proliferated, reducing potential feeding areas. Drainage of wetlands for development and agriculture, as well as increased human disturbance appear to be other serious threats (Hothem et al. 2010).