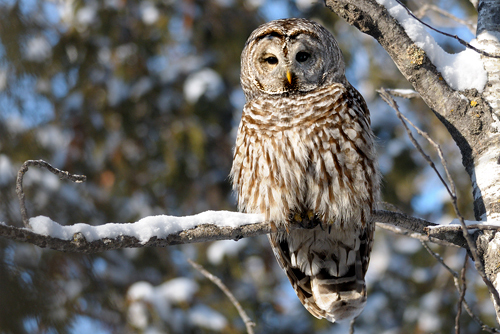 Characteristics and Range The Barred Owl is a large, stocky nocturnal raptor. Its loud call, famously rendered as who-cooks-for-you, is usually the first indication of its presence. It is smaller than the Great Horned Owl, lacks ear-tufts, has grey-brown upperparts speckled with white, a barred breast, and a streaked belly. In addition, it is the only regularly occurring Manitoban owl species with dark eyes. Formerly a resident of eastern North America, its range is believed to have expanded west in historic times across the centre of the Prairie Provinces and now covers much of British Columbia and parts of the northwestern conterminous U.S.A. (Houston and McGown 1999, Mazur and James 2000). The disjunct subspecies sartorii in the west Mexican highlands may be a separate species (Barrowclough et al. 2011). Birds usually maintain their territories year-round, but are seldom encountered in Manitoba in winter.

Distribution, Abundance, and Habitat The Barred Owl's distribution as delineated by the atlas is very similar to that shown in The Birds of Manitoba. However, atlas results show near-absence in much of the Prairie Potholes and a lack of detections from the region east of Lake Winnipeg's north basin (where limited nocturnal surveying occurred). The Boreal Hardwood Transition had the highest occupancy, at 34%, and probability of observation was also highest here and in adjacent parts of the Boreal Softwood Shield. No other BCR had more than 5% occupancy, but the results are skewed by the high nocturnal survey effort in the southeast. The northernmost observations were at Burntwood Lake and Paint Lake. In the Prairie Potholes the sightings were restricted to river courses and the Spruce Woods region. Despite its far-carrying call, the Barred Owl is infrequently encountered; the average annual detection rate from the Manitoba Nocturnal Owl Survey is one individual per 71.4 km (Duncan 2018). Prior to the atlas, there were few nest records for the province, but nine nests were located by researchers in 2009 and 2010 (Whiklo and Duncan 2014). All were located in tree cavities, most with lateral openings, in a variety of hardwood trees, especially balsam poplar. The Barred Owl prefers mature hardwood or mixed-wood forests, often near water. Whiklo and Duncan (2014) concluded that its distribution, including the northern range limit, was most influenced by the availability of suitably large cavity-bearing trees. The limitation of suitable nest sites, therefore, likely restricts occurrence in the Prairie Potholes to riparian forests. Nonetheless, in 2017, the first use of a stick nest (built by Northern Goshawks) in Manitoba was recorded in a conifer plantation near Brandon (C. Artuso, K. De Smet, pers. obs.).

Trends, Conservation, and Recommendations The Barred Owl was formerly considered rare in Manitoba (Thompson [Seton] 1890). Its current distribution in western Manitoba and adjacent Saskatchewan may be a result of westward movement in the 19th century (Livezy 2009a, 2009b). In its newly acquired range in the west, the Barred Owl has been known to displace or hybridize with the Endangered northern Spotted Owl (Mazur and James 2000) and, as a novel predator in these areas, has decimated populations of the Western Screech-Owl (Elliott 2006, Cannings 2015). Being a generalist predator, the Barred Owl's numbers do not fluctuate as they do in some other owl species. The removal of large trees or limbs with cavities may be the greatest threat to the species.