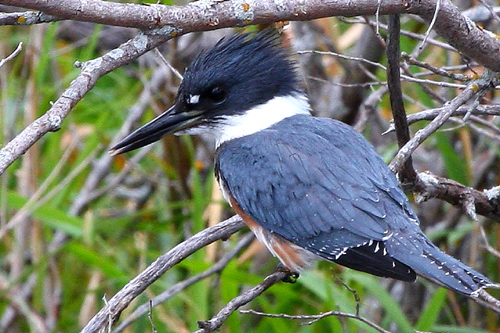 Characteristics and Range The Belted Kingfisher, Canada's only kingfisher species, is easily recognized by its shaggy blue-gray crest, dagger-like bill, and rattling call. Breeding occurs from Alaska eastward across Canada south of the treeline, and throughout most of the U.S.A. except the desert regions. It winters along the Pacific coast and across the continent south of the Great Lakes, wherever open water occurs, into Central America, the Caribbean, and the northern coast of South America.

Distribution, Abundance, and Habitat The Belted Kingfisher is found throughout Manitoba but it is scarce in the far north. There was evidence of probable breeding farther north than previously described in The Birds of Manitoba, especially along the Owl River in Wapusk National Park, the Seal River north of Churchill, and near Nueltin Lake. Although kingfishers can fish in almost any waterbody with suitable perches, their preferred nesting substrate, typically burrows excavated along vertical banks, limits their local distribution and likely explains the pattern of northern records (predominantly along steep-banked rivers).

Although the percentage of occupied squares was greatest in the Boreal Softwood Shield and Boreal Taiga Plains, there was breeding in both the Boreal Hardwood Transition and the Prairie Potholes. Both relative abundance and probability of observation pointed to higher densities through the boreal portions of the province, including the elevated parts of the Manitoba Escarpment, with lower abundance in the boreal-parkland transition and the treeline-tundra transition, and with the lowest abundance in the relatively treeless portion of the Prairie Potholes and in the far north.

Trends, Conservation, and Recommendations Although this species is widespread and fairly common, BBS data show a long-term decline across Canada; however, there is no significant trend in Manitoba. In some parts of the range, such as in Manitoba's Prairie Potholes, populations have grown and spread due to increasing numbers of sand and gravel pits. Nonetheless, kingfishers are sensitive to disturbance, and may abandon nesting territories if human use of those areas becomes too great.  This species is currently listed as a priority species for consideration by COSEWIC because of long-term declines and its specialized nesting habitat.