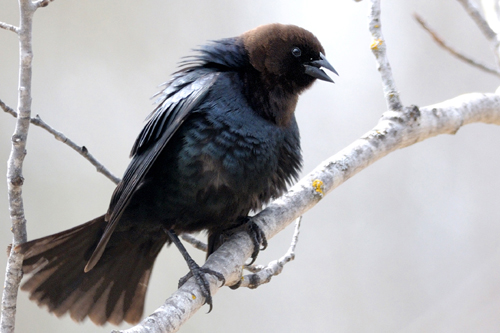 Characteristics and Range The Brown-headed Cowbird is Manitoba's only obligate brood parasite. This small blackbird is well named for the glossy adult male's brown head; females and immature birds are a uniform dull brown. During the breeding season, its reliance on other species of passerine birds to rear its young ties it to the availability of suitable hosts—species that accept the cowbird's egg and feed insects to their young—and suitable foraging sites. Historically a species of the Great Plains, cowbirds captured insects flushed by bison. Clearing of forests and expansion of agriculture created new habitats and new opportunities for parasitism. The cowbird's range expanded northeast and east during the 1800s and west to the Pacific Coast by the mid-1900s (Lowther 1993, Rothstein 1994). Today, breeding cowbirds are observed foraging in pastures and feedlots, roadsides and lawns, and at the edges of woodlots, all within a few kilometres of potential hosts' nests. In Manitoba, adult cowbirds leave the breeding sites by mid-July for wintering areas in the southern U.S.A. and northern Mexico, while juveniles are rarely seen after early August.

Distribution, Abundance, and Habitat Peak abundance and probability of observation were recorded in the agricultural areas of the southern fifth of the province, reflecting the range portrayed in Briskie et al. (1992). The highest abundances were in the Prairie Potholes, diminishing in the eastern portion of the Boreal Taiga Plains and the Boreal Hardwood Transition. Hosts and parasitism rates in the Boreal Softwood Shield and northwards are unknown, but cowbird abundance and probability of observation are low. With the exception of a pocket of possible breeding just north of Lake Winnipeg; there are no detections east of Lake Winnipeg's north basin. The cowbird's distribution in the northern Manitoba reflects roadways and towns, especially Highway 6 and the road to Norway House, as well as some other settlements including The Pas, Grand Rapids, Easterville, and Red Deer Lake. The absence of detections in well-surveyed squares confirms that this pattern is not an artifact of survey effort.

Trends, Conservation, and Recommendations This species has undergone a long-term decline in Manitoba, but the short-term trend is stable (BBS data). Although parasitism by the Brown-headed Cowbird generally reduces the host's productivity, it has not been strongly implicated in declines of any species here, as it has elsewhere (Lowther 1993). However, this possibility should not be ignored in conservation measures for Species At Risk including Sprague's Pipit and Baird's Sparrow. In Manitoba, some of the highest abundance values for cowbirds are recorded in grassland fragments in the Prairie Potholes, where parasitism rates of up to 36% of nests of some species, combined with nest predation, greatly reduce nesting success, highlighting the need to curtail further habitat fragmentation (Davis and Sealy 2000).Research on the Golden-winged Warbler (nationally and provincially Threatened) in southeastern Manitoba showed 11% of nests were parasitized, resulting in fewer fledged young (L. Moulton, unpublished data). Among hosts in the Boreal Taiga Plains, parasitism of Song Sparrow nests at Delta Marsh reached ~80% (Woolfenden et al. 2004), with most nests parasitized more than once (McLaren et al. 2003). This has apparently created a population sink, with adults recruited each year from more productive populations.