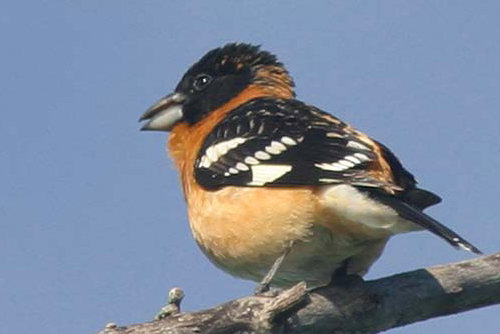 Characteristics and Range A robust, finch-like cardinal relative, the Black-headed Grosbeak is the western counterpart of the Rose-breasted Grosbeak. The breeding Black-headed male has unmistakable, extensive cinnamon underparts and rump, with yellow underwing coverts visible in flight, whereas females and immature males of the two species are difficult to distinguish from each other. Differences in vocalizations are subtle: listen for an "off-sounding" (fast and choppy) Rose-breasted Grosbeak. The Black-headed Grosbeak breeds across much of the western U.S.A., north to a line from southern British Columbia to western North Dakota, with a convoluted southern boundary extending to northern Mexico. The winter range occupies much of western and central Mexico, including the southernmost portion of the breeding range (Ortega and Hill 2010). Eastward vagrancy is rather frequent. Stray migrants are found occasionally in Manitoba, and confirmed breeding in the extreme southwest was one of the atlas's major highlights.

Distribution, Abundance, and Habitat A male Black-headed Grosbeak, presumed to be the same individual each year, sang on territory in riparian woodland along the Souris River between Melita and Coulter each summer from 2006 to 2010. Breeding was eventually confirmed here, for the first time in Manitoba, when K. De Smet saw the male feeding young at a nest in a tall shrub on 15 June, 2010 (Artuso et al. 2010). The female was not seen and the possibility of hybrid pairing cannot be ruled out, as Rose-breasted Grosbeaks regularly occupy the same woodland tract. A Black-headed Grosbeak at Birds Hill Provincial Park on 18 June, 2011 (W. Janzen) was judged to be a lingering migrant, unlikely to be breeding.

Trends, Conservation, and Recommendations BBS data indicate mostly increasing populations and a stable range; the broad range of habitat preferences, both in summer and winter, no doubt contribute to this encouraging situation (Ortega and Hill 2010). The species is too rare in Manitoba to suggest conservation measures, but riparian woodland of the type it has occupied here is a vital part of the prairie mosaic.