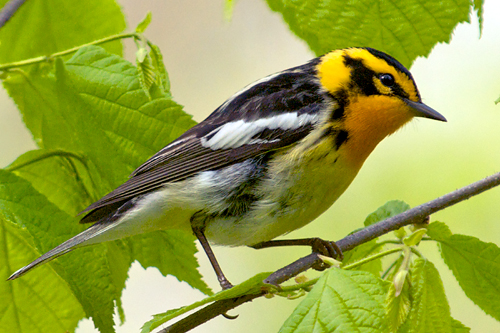 Characteristics and Range The brilliant orange throat, the black triangular ear patch, and the wide white wing patch make the breeding-plumaged male Blackburnian Warbler unmistakable. The adult female is similar but with a more subdued orange throat and two white wingbars. The breeding range is primarily northeastern, extending from extreme southwest Newfoundland across the southern boreal regions of Canada to central Saskatchewan and (locally) central Alberta, south to New England, the Great Lakes, and through the Appalachians to Georgia (Morse 2004). The principal winter range is in southern Central America and northern South America, following both slopes of the Andes into Peru (Morse 2004).

Distribution, Abundance, and Habitat The atlas shows the range of Blackburnian Warbler extending well north of the estimated limit in The Birds of Manitoba, reaching throughout the Boreal Softwood Shield, albeit sparsely in northern portions. The principal range is in the Boreal Taiga Plains, the southern Boreal Softwood Shield, and the Boreal Hardwood Transition. Regions of peak abundance and probability of observation are most pronounced in Riding Mountain, the Duck Mountains, and the Porcupine Hills. Elevated numbers were also found near the north shore of Lake Winnipegosis and a portion of the Ontario border region centred around Nopiming Provincial Park. The few records in the Prairie Potholes, apart from the boreal fringes, were in the forested islands of Spruce Woods and the Turtle Mountains. The Blackburnian Warbler tends to breed in areas of mature black spruce and mixed forest (The Birds of Manitoba). Even when the habitat is mixed forest, the species still concentrates its time in large conifers (Dunn and Garrett 1997).

Trends, Conservation, and Recommendations The Blackburnian Warbler shows long-term stability in Manitoba and a slight increasing trend in Canada. The removal of large conifers, forest fragmentation, and conifer die-off from insect pests all have an adverse effect on population size (Morse 2004). As with many Neotropical migrants, alteration and destruction of their tropical wintering habitats pose serious threats to this species (Morse 2004).