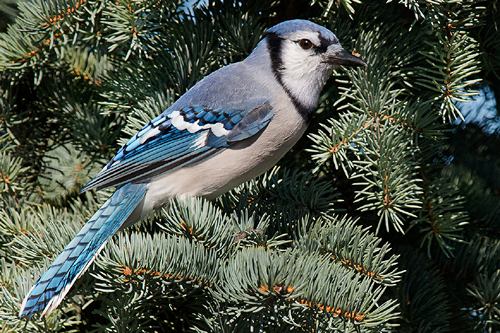 Characteristics and Range A conspicuous denizen of gardens and parks, featuring prominently in popular culture, the Blue Jay is one of North America's most familiar birds. Its breeding range stretches from extreme northeastern British Columbia across the central boreal forest to Newfoundland and south to the Gulf States and Florida. It is essentially absent as a breeder west of the Great Plains, except for some limited westerly non-breeding movements (Smith et al. 2013). Although the species is considered a year-round resident, considerable southward movements may take place in Manitoba, notably in September (returning in May), resulting in fluctuating numbers locally in winter.

Distribution, Abundance, and Habitat Distribution, Abundance and Habitat Atlassers documented the Blue Jay breeding throughout southern Manitoba, with the northern range limit in the central Boreal Softwood Shield, much as described in The Birds of Manitoba. Over 80% of squares in the Boreal Hardwood Transition were occupied, with percentages diminishing both to the north and to the west of this zone. There were few records north of Lake Winnipeg, although scattered sightings occurred as far north as Lynn Lake. Relative abundance was greatest from southeast Manitoba up along the east shore of Lake Winnipeg as far north as Berens River (southern Boreal Softwood Shield), and in areas in the southern and central Interlake and the Duck Mountains (southern Boreal Taiga Plains). The probability of observation was high in the above regions, with extra prominence in the Porcupine Hills and in Riding Mountain National Park. The preferred habitats in Manitoba consist of mature mixed or deciduous woods; open prairie and cropland are largely avoided. In the Prairie Potholes, its distribution is restricted to wooded areas in towns, around farmsteads, and along river courses. The Blue Jay's familiarity is linked to its success in human-altered landscapes such as in suburban areas, where the species has greater nest success and more frequent double broods, even triple broods in southern locations (Smith et al. 2013). Furthermore, it is easily attracted to feeders, where it provides some welcome colour during winter.

Trends, Conservation, and Recommendations BBS data show long-term increases in both Manitoba and Canada since 1970, despite a long-term decline in the U.S.A., and stable populations in Manitoba from 2005-2015. Manitoba CBC data show considerable fluctuations from year to year, with greatest numbers of birds per party hour occurring in different years at different locations. These fluctuations appear to be linked in part to varying fall abundance of acorns (P. Taylor, pers. obs.) and to the distribution of sunflower fields or well stocked feeders in agricultural areas (K. De Smet, pers. obs.). There are few conservation concerns for this species currently.