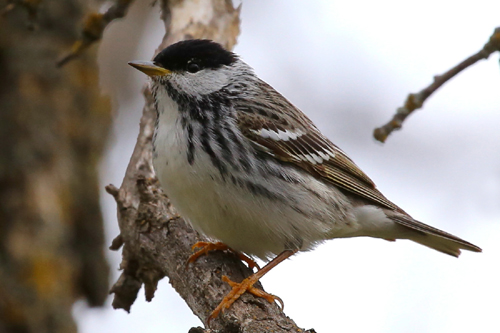 Characteristics and Range The Blackpoll Warbler is aptly named for the chickadee-like black cap of the male in spring plumage. It boasts one of the highest pitched songs of any bird (8 to 10 kHz) and the longest migration of any wood-warbler. The Blackpoll Warbler breeds throughout the northern boreal forest, extending north into the treeline-tundra transition and south into subalpine and eastern coastal spruce/fir forests. In fall, western breeders travel southeast across Canada and the northern U.S.A. to join migrants along the east coast. Most are believed to fly directly over the Atlantic to winter in northeastern South America (DeLuca et al. 2013). Small numbers are even found in southern Chile and Argentina, rivalling the long-distance migration of the Arctic Tern.

Distribution, Abundance, and Habitat In Manitoba, the Blackpoll Warbler is a common breeder throughout the Taiga Shield & Hudson Plains and into the northeastern Boreal Softwood Shield, with the probability of observation dropping rapidly southward. Highest relative abundances were modelled as being west of Wapusk National Park and towards the Nunavut land border, but are very high throughout the remainder of the Taiga Shield. Atlas records compare favourably with the breeding range as estimated in The Birds of Manitoba and support suspected breeding farther south. Late migrants are regularly recorded into early June and, because the species sings during migration, it is difficult to differentiate migrants from breeders. Hence, the maps exclude records before 7 June. Late June records between Flin Flon and The Pas, and territoriality and food-carrying in the northern Interlake at the base of Long Point provide breeding evidence in the Boreal Taiga Plains. Most of these were at off-road sites, so Blackpoll Warblers might breed more commonly in this region than indicated. The southernmost record near Roblin (singing male on 4 July but in seemingly unsuitable habitat, M. Waldron and W. Christianson) is only slightly south of previously confirmed nesting in the Duck Mountains (Walley 1989). Possible breeding was reported in northwest Ontario at the same latitude as Manitoba records east of Lake Winnipeg (Sutherland 2007b). Boreal black spruce and tamarack forest is regular habitat in Canada, but the species breeds in spruce/alder/willow riparian thickets in Alaska (a habitat type also used for nesting in Manitoba) and seems to favour spruce bogs and conifer swamps in the south (DeLuca et al. 2013).

Trends, Conservation, and Recommendations The Blackpoll Warbler is abundant in appropriate habitat. Though sparse, because of limited access to the core range, BBS data suggest large declines in some localities and in Canada overall; Manitoba data are inconclusive. The reasons for any declines are not known. The Blackpoll Warbler can be killed in disturbingly high numbers at towers and wind turbines, but this is often correlated with unusual weather and is not considered a significant long-term cause (DeLuca et al. 2013). Disturbance on the breeding grounds seems unlikely given the generally remote areas used by this species, although climate change and post-fire deforestation could degrade breeding habitat. Threats during migration include changing intensity and timing of oceanic storms and increased coastal and offshore energy development. Habitat use on wintering grounds and potential impacts there deserve more study.