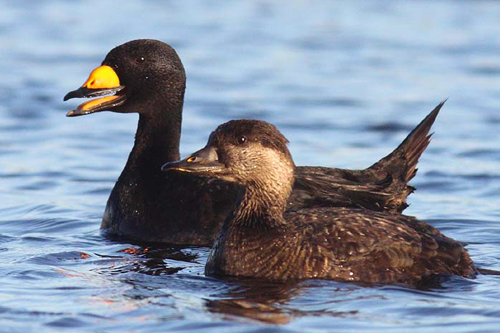 Characteristics and Range The Black Scoter is one of three scoter species that occur regularly in North America. It has recently been split from the Common Scoter of Eurasia. Males are all-black, with a yellow-orange protuberance on the bill; females are brown with a pale cheek. The breeding range of this sea duck has long been a bit of a mystery; indeed, until recently it was not thought to breed regularly in Manitoba, the primary two breeding areas being described as northern Quťbec and Alaska (Bordage and Savard 2011). During migration, large numbers may gather in the mouth of the Churchill River or near shore on Hudson Bay. By mid-summer, these flocks are made up almost entirely of males; for example, one-day aerial counts have exceeded 88,000 males in James Bay and Hudson Bay (Ross 1983, 1994). Most Black Scoters winter along the Atlantic and Pacific coasts of Canada and the U.S.A.

Distribution, Abundance, and Habitat Nests of this species are notoriously difficult to find, which several northern atlassers can attest. One nest with eggs was found northwest of Churchill in the 1970s (The Birds of Manitoba). During the atlas period there was only one confirmed breeding record; a brood was seen east of Courage Lake. Probable reasons for the lack of confirmed records are that most of the breeding range lies in remote areas with difficult access and that the species is a late breeder; hence, observers were generally in the field before most broods would have hatched. However, from the atlas results it appears clear that this species is a regular breeder across much of northern Manitoba. The Black Scoter was found in 86% of surveyed squares in the Arctic Plains & Mountains, falling to 18% of squares in the Taiga Shield & Hudson Plains. Abundance was also higher in the former region. Probability of observation was particularly high near the Nunavut border between Nueltin Lake and Hudson Bay, gradually diminishing to the south and east. The southernmost observations were made at about 56į30'N. During the breeding season birds are found on streams and freshwater ponds and lakes in taiga and tundra areas, where nests are built in clumps of grass close to water (Bordage and Savard 2011). †

Trends, Conservation, and Recommendations Black Scoters are listed as globally Near-threatened. Reproductive success varies greatly from year to year, and there is concern that this species may not be able to sustain recent increases in hunting along the Atlantic Flyway (Bordage and Savard 2011). As is the case with other Arctic sea ducks, climate change and resource extraction in the north pose possible threats (King and Sanger 1979, Baldassarre 2014).