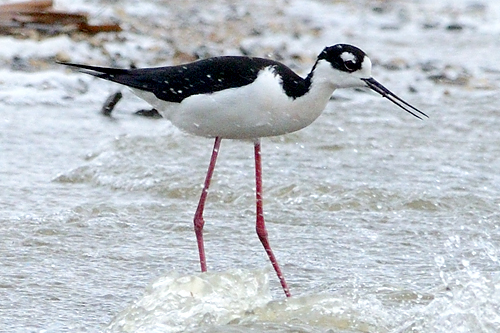 Characteristics and Range An attractive shorebird with striking black-and-white plumage, the Black-necked Stilt is easily recognized by its exceptionally long (stilt-like), bright red legs. Its graceful appearance gives way to incessant calling, dive-bombing, and injury-feigning when disturbed during the breeding season. Northern populations nest in scattered disjunct areas from southern Alberta and Saskatchewan through western U.S.A. and along the Atlantic coast from Delaware to Florida, and winter from California and the Gulf of Mexico south to Panama. Resident populations occur in Mexico, Middle America, northern South America, and the Hawaiian Archipelago (Robinson et al.1999, Dunn and Alderfer 2011). The Black-necked Stilt is sometimes considered conspecific with the Black-winged Stilt, which is widespread in the Old World.

Distribution, Abundance, and Habitat The Black-necked Stilt was rare in Canada until 1970, but has since greatly increased in the west, now nesting regularly in Alberta, increasingly in Saskatchewan, and sparingly in British Columbia (Gratto-Trevor 2002). It was first observed in Manitoba in 1969, with five additional occurrences until 2000 (The Birds of Manitoba), and occasional but irregular observations thereafter, though with only one observation during the atlas period (a bird seen in late May, 2011 with other shorebirds in a flooded field near Pipestone, thus possibly a migrant). The vast majority of sightings in Manitoba since 2000 have been at Whitewater Lake, where Manitoba's first confirmed breeding came in 2006 when two pairs nested, one successfully fledging three chicks in early July and the other abandoning the nest (pers. obs.). There was no other confirmed nesting at Whitewater Lake until 2016 when a pair fledged three young in an ephemeral wetland just west of Whitewater Lake.

Black-necked Stilts often associate with their relative the American Avocet, joining them in anti-predator displays, but are more territorial as opposed to the semi-colonial avocets. Stilts tend to use shallow wetlands and flooded fields with exposed shorelines, but generally occur in areas with slightly more emergent vegetation than avocets (Robinson et al.1999).

Trends, Conservation, and Recommendations Although many North American shorebird species are declining, the Black-necked Stilt is a notable exception (Gratto-Trevor 2002). Consistent with recent expansions, BBS data suggest a large increase in Canada and stability or moderate increases in many other areas (Sauer et al. 2017). It remains to be seen whether range expansion will continue and if the Black-necked Stilt will establish itself as a regular nester in Manitoba, but this probably depends on the stewardship of sufficient ephemeral wetlands to offer appropriate nesting habitat.