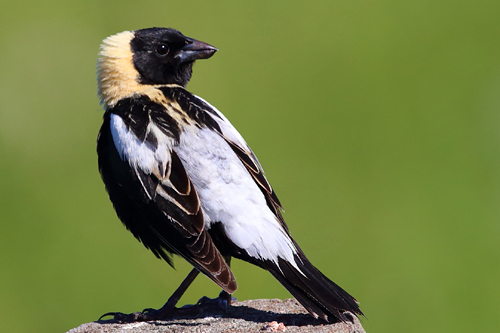 Characteristics and Range Male Bobolinks are unmistakable in their breeding plumage. They are mostly black and white, with a prominent pale-yellow patch on the back of the head. Against the male's black backdrop, his stark white scapulars and rump make it look like he is wearing a "backwards tuxedo". In the breeding season, males perch at the tops of shrubs, tall forbs, or fenceposts, regularly fluttering up into the air on quivering wings to perform their characteristic jumble of courtship songs. Females are much less conspicuous. They are almost sparrow-like, being yellowish-buffy with dusky-black streaking on the back and sides, and with a distinct dark line extending from the eye to the back of the head. Young birds resemble females, but have a deeper, buff-yellow appearance, particularly on the underside. In late summer, males moult into their winter plumage and take on the appearance of females. The Bobolink breeds in grasslands across much of southern Canada and the northern U.S.A. It winters in grasslands in Bolivia, Paraguay, and Argentina. Indeed, its remarkable 20,000 km trans-equatorial flight gives it one of the longest migration routes of any North American songbird (Martin and Gavin 1995).

Distribution, Abundance, and Habitat The Bobolink's distribution is very similar to that of the Western Meadowlark. Atlas records show a distinct affinity for the southern part of the province, very much corresponding to what was depicted in The Birds of Manitoba. Occurrence records are strongly concentrated in the Prairie Potholes, followed by the Boreal Hardwood Transition, and Boreal Taiga Plains. Abundance follows a similar pattern, with greatest abundances occurring in the southcentral part of the province. A highly gregarious species, the Bobolink nests on the ground in a variety of grassland habitats, including native grasslands, pastures, hayfields, and wet meadows where herbaceous vegetation is relatively tall (Herkert 1994, Renfrew and Ribic 2002). They avoid areas dominated by short grass, grasslands with patches of bare soil (Warren and Anderson 2005), and dense shrubby fields (Bollinger 1988, Bolinger and Gavin 1992). In Manitoba, they are found frequently in alfalfa fields; however, in some regions, they tend to avoid areas dominated by alfalfa (COSEWIC 2010).

Trends, Conservation, and Recommendations Declines in Bobolink populations were first noted in the early 1900s (Bent 1958), due to habitat loss and over-hunting and persecution by humans in the southern U.S.A., where they feed in rice crops during migration (Martin and Gavin 1995). Continent-wide analysis of BBS data continues to show widespread population declines, with losses generally being more severe in Canada than the U.S.A. The Canadian population of this Threatened species has declined by about 77% since 1970 (BBS data), mainly due to loss and fragmentation of grasslands, destruction of nests from haying operations, mortality from exposure to pesticides (especially on the wintering grounds), and overgrazing (COSEWIC 2010). While declines are greatest in eastern Canada, losses in Manitoba are also troubling over both the short and long terms. Bobolinks benefit from effective grassland conservation strategies and efforts to delay haying operations, which results in improved nesting success.