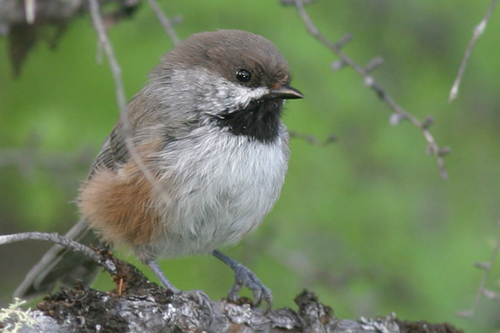 Characteristics and Range Its brown cap and back and the drawled, raspy chick-a-dee call distinguish the Boreal Chickadee from its better known cousin, the Black-capped Chickadee. The Boreal Chickadee is also much more secretive and is difficult to detect during the spring and summer, although slightly more gregarious and conspicuous in winter. This chickadee is found almost exclusively in the boreal forest, from Alaska to Newfoundland and south into the northernmost conterminous U.S.A., and is one of the few songbirds able to live in this habitat year-round. Small migratory movements and periodic irruptions do occur, usually in the fall and winter.

Distribution, Abundance, and Habitat The Boreal Chickadee nests in coniferous forests, especially areas dominated by spruce or fir, although they may also occasionally breed in mixed forests (Ficken et al. 1996). The range documented by atlas efforts follows this habitat preference, and is similar to that depicted in the The Birds of Manitoba, viz., throughout the boreal biome and excluding the Prairie Potholes. Detection rates for this secretive species were generally low, peaking in the Boreal Softwood Shield where it was recorded in 36% of surveyed squares. Its relative abundance was highest in the central boreal forest; in particular, within the Boreal Taiga Plains (northeastern portion and along the Manitoba Escarpment) and the eastern Boreal Softwood Shield. From these regions, abundance and probability of observation begin to decrease to the south and far north, and this species was found in only one square in the Arctic Plains & Mountains, where trees are nearly absent.

Trends, Conservation, and Recommendations The lack of an advertising song and a breeding window that dœs not always align with BBS surveys make it difficult to estimate population trends for the Boreal Chickadee. It appears that this species is stable across most of its range, although populations do show declines in the Maritimes. Nonetheless, abundance has decreased noticeably in the boreal biome east of Winnipeg, despite occasional irruptions, doubtless due to clearing and fragmentation of remaining mixed forests (R. Koes, pers. obs.). Monitoring is necessary with increasing development in the boreal biome, as the Boreal Chickadee may be affected by logging of mature forest and climate change (Ficken et al. 1996).