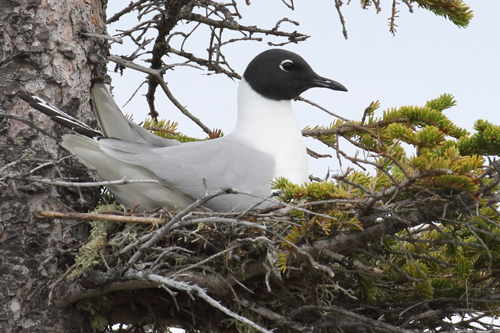 Characteristics and Range One of three small, black-headed gulls nesting in Manitoba, Bonaparte's Gull is the only species to flash a wedge of white in the front edge of the wing and have an all-black bill. Its flight is buoyant and tern-like. Feeding for invertebrates and fish is done on the wing with short dives or aerial dipping, and on the water by surface-dipping much like a phalarope. Bonaparte's Gull nests almost exclusively in trees, unique among gulls. It breeds from southwest Alaska through the boreal regions of the Yukon, Northwest Territories, north-central British Columbia and eastward mostly north of 50˚N into west-central Québec (Burger and Gochfeld 2002). The only report of breeding outside of North America is in Iceland (Nielsen 2017). Migrating birds gather in large flocks to winter on coasts, from British Columbia to central Mexico in the west and from New Brunswick through the southeastern U.S.A. to northern Mexico and Cuba. Manitoba birds likely move through the Great Lakes and Mississippi flyway (Burger and Gochfeld 2002, The Birds of Manitoba).

Distribution, Abundance, and Habitat Atlas results show Bonaparte's Gull occupying much of the breeding range as illustrated in The Birds of Manitoba with these differences: western records reaching south only to the Duck Mountains, additional northeastern records extending the range along the Hudson Bay coast into the southern Arctic Plains & Mountains, and sparse nesting in the southeast from Bissett south to the international border. The most notable confirmed breeding, a nest 7.5 m high in a black spruce found on 16 June, 2010 near Windy Lake (V. Reimer), was ~200 km south of the previously estimated southern range limit. The highest percentage of occupied squares was in the Boreal Softwood Shield, Taiga Shield & Hudson Plains, and Arctic Plains & Mountains. Breeding records quickly decrease southward in the Boreal Taiga Plains and are rare in the Boreal Hardwood Transition. The probability of observation reflects this breeding distribution, though underestimating nesting occurrence near the Hudson Bay coast. Bonaparte's Gulls favour sparsely wooded areas near ponds, lakes, bogs or other wetlands that provide good visibility for detecting predators. Adults dive-bomb intruders even when over 100 m away from nest or young, regaling them with rasping screams and often releasing fecal matter with uncanny accuracy. Nests are usually placed between1.5 - 8 m high on the lee side of coniferous trees, most often spruce (Jehl 2004, pers. obs.). Bonaparte's Gulls nest singly or in loose colonies (Burger and Gochfeld 2002) with nests 100 m or more apart (pers. obs).

Trends, Conservation, and Recommendations The majority of nesting occurs in remote boreal regions away from most BBS routes; the limited data show apparent stability but with low reliability. Bonaparte's Gull is ranked as an abundant breeder (S5B) provincially and considered Least Concern internationally, but remains a priority species in several federal BCR strategies as most of the world's breeding population is in Canada. Migration counts at staging areas could help monitor populations of this species (Kirk et al. 2008). Lake Winnipeg or other Manitoba sites might serve as such monitoring sites given past aggregations (The Birds of Manitoba, Taylor 1993). Effects of increased resource extraction and road-building in breeding areas, along with habitat degradation due to climate change should be examined. Bonaparte's Gull remains one of the least studied North American gulls (Burger and Gochfeld 2002).