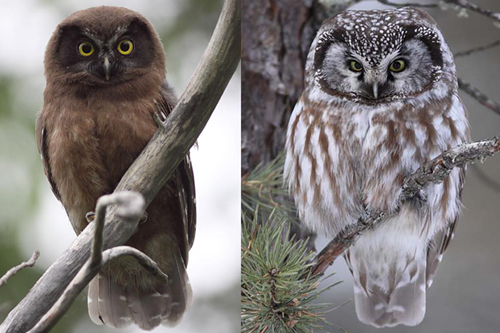 Characteristics and Range This small, secretive owl is one of the most sought-after species by North American birders. This species is best detected by its song, which is remarkably similar to the winnowing of Wilson's Snipe. Found across the Holarctic boreal/taiga and subalpine forests, this species exhibits a partially migratory strategy, moving south only when forced to do so by limited access to food; males being more reluctant than females to disperse from breeding areas (Hayward and Hayward 1993). In Manitoba it is found throughout the boreal forest, including some parts of the boreal-parkland transition and north to the treeline, with non-breeding dispersal into other parts of southern Manitoba, especially the southeast, including cities and towns.

Distribution, Abundance, and Habitat Atlas detections generally reflected the range as shown in The Birds of Manitoba, although the Boreal Owl was not found in Riding Mountain National Park, where it appears to be rare (one territory found in 2017, Manitoba Nocturnal Owl Survey). The difficulty of nocturnal surveying in remote areas in early spring when this species is most vocal meant that most detections were along roadways; however, this does not reflect the real distribution pattern. Relative densities of this species are poorly understood and may vary with food supply, especially following the cycle of its presumed main prey species in Manitoba, the red-backed vole (Myodes gapperi) (Hayward and Hayward 1993). As a result, individual Nocturnal Owl Survey routes show strong annual variation in number of detections; for example, the Bird River Route has ranged from zero to 19 Boreal Owls detected per survey over 24 years (average ± standard deviation: 3 ± 4.1). The Boreal Owl may prefer relatively open forest with a mix of coniferous and deciduous trees, as well as standing snags, where cavities for nesting and roosting are most likely to occur (Hayward and Hayward 1993).

Trends, Conservation, and Recommendations Given its Holarctic distribution, the Boreal Owl is considered to be of Least Concern globally. Population trends are difficult to ascertain but careful analysis of data from the Manitoba Nocturnal Owl Survey and other surveys could provide insight. This species could benefit from careful forestry planning to maintain habitat for the prey base and to avoid removal of cavity trees.