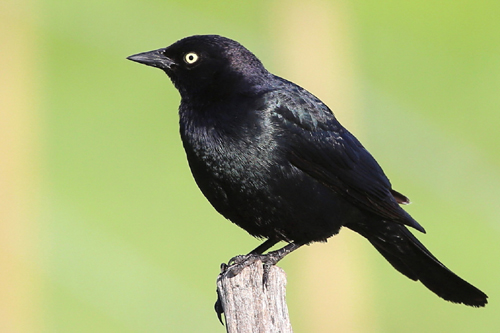 Characteristics and Range The male Brewer's Blackbird suggests a small Common Grackle but has a proportionately shorter tail and, although it is uniformly glossy, iridescent colours are limited to a purplish lustre on the head and shoulders and a hint of bottle-green elsewhere. The female is uniformly dark greyish brown. The combination of pale-eyed males and dark-eyed females help distinguish this species from the all-pale-eyed Rusty Blackbird (the two species' breeding ranges overlap slightly in central Manitoba). Brewer?s Blackbird is much less noisy than most other blackbird species.

Distribution, Abundance, and Habitat Prior to European settlement, Brewer's Blackbird was a strictly western species, breeding in southern Canada from British Columbia to Manitoba, southward through the western U.S.A. to California and Colorado. Beginning in the 20th century, its range expanded eastward to the Great Lakes region and northward to the Northwest Territories, occupying cleared agricultural land and transportation corridors (Martin 2002). Concurrently its winter range, which probably extended originally from southern coastal British Columbia to northern Mexico, expanded across the southern U.S.A. almost to the Atlantic coast. Prairie and eastern populations are entirely migratory, and winter stragglers in Manitoba are extremely rare.

Atlas records define rather accurately the extent of agriculture in Manitoba, i.e., the entire Prairie Potholes and cleared portions of the Boreal Taiga Plains and Boreal Hardwood Transition, but with scattered records along major corridors in the boreal forest, notably along Highway 6 from Gypsumville to Grand Rapids. Occurrence in the Boreal Softwood Shield was limited to Flin Flon and a small area east of Lake Winnipeg. Computed probability of observation was high throughout the Prairie Potholes, while abundance was greatest in intensive agricultural regions, especially from the Red River valley to the south shore of Lake Manitoba and from Brandon and Virden to the North Dakota border. Indeed, Brewer's Blackbird is one of the few species that persist and even thrive in regions where agribusiness rules, often nesting colonially in the vicinity of roadside ditches. Range-wide, a variety of nest settings, either low or directly on the ground, has been recorded (Martin 2002). Variable outcomes of competition between Brewer's Blackbird and the Common Grackle have been noted in different habitats in other North American regions (Martin 2002), and it is noteworthy that grackles prevail in small towns throughout Manitoba.

Trends, Conservation, and Recommendations Despite its adaptability to agricultural development, Brewer's Blackbird numbers are in general decline, a noteworthy exception being a zone from south-western Manitoba through the Dakotas. Overall conservation concern is low and, while certain agricultural practices that benefit the species have been identified (Martin 2002), there seems to be no current need for special recommendations. Unlike several other blackbird species and the European Starling, Brewer's Blackbird is not considered a serious crop pest (because it feeds primarily on already-wasted grain), but is sometimes a victim of lethal control measures aimed at those other species (Martin 2002).