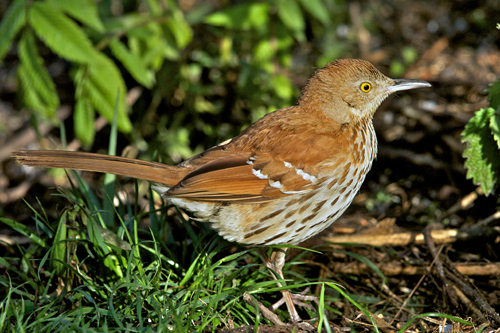 Characteristics and Range The Brown Thrasher is typically seen briefly as it flies low across a country road or from one cluster of shrubs to another. But however brief the view, the elongated silhouette and uniformly rusty upper parts are unmistakable. If seen on an exposed song perch or foraging in dense shrubbery, the streaked rather than spotted breast, yellow eyes, fine white wingbars, and long bill distinguish the Brown Thrasher from thrushes. The song has characteristic paired phrases (Northern Mockingbirds tend to sing in threes, while Gray Catbirds babble on without such repetition). The breeding range extends across southern Canada from southeastern Alberta to New Brunswick, and southward through the Great Plains and eastern U.S.A. to eastern Texas, the Gulf coast, and peninsular Florida (Cavitt and Haas 2014). BBS data indicate greatest numbers in an irregular-shaped zone linking Nebraska and Kansas to the Gulf coast and the Virginias. The winter range is essentially a southeastward contraction of the breeding range, but extending farther into Texas, with small numbers also in New Mexico and Arizona.

Distribution, Abundance, and Habitat Atlas records are concentrated primarily in the Prairie Potholes and in portions of the Boreal Taiga Plains and Boreal Hardwood Transition with partial agricultural development. Occasional penetration into the boreal forest is largely restricted to the Boreal Taiga Plains, with scattered records north of 54.3°N. The relative abundance and probability of observation show similar complex patterns with peaks in the extreme southwest, the Morden area, the Minnesota border region east of the Red River valley (near vestiges of tall-grass prairie), and the Lake Manitoba basin (especially the western Interlake). A band of reduced abundance follows the Arden Ridge and Pembina River valley from the Swan River area to the Pembina Hills, suggesting avoidance of heavily wooded areas, whereas more open terrain in the southwest is favoured. The preferred habitat is shrubby, and may be human-altered (e.g., rural gardens or shelterbelts; vicinity of gravel pits; post-logging early-successional habitats) or more natural (e.g., vicinity of potholes and river valleys with relatively sparse trees and shrubs; post-fire early-successional aspen parkland; open deciduous woodland edges).

Trends, Conservation, and Recommendations Human activities have had mixed effects on the fortunes of this species. The Brown Thrasher is thought to have benefited from widespread clearing of forests for agriculture, and from fire suppression in the eastern Great Plains, permitting substantial range expansion since European settlement (Cavitt and Haas 2014). Shelterbelts, hedgerows and other plantings in the prairie also appear to have aided the species. It is nonetheless adversely affected by intensive use of certain pesticides, and highway mortality is relatively high (Cavitt and Haas 2014). BBS trend maps show a pattern of widespread decline, partly offset by increases in the northwestern Great Plains and locally in a narrow band from the Gulf States to Québec. Nonetheless, this species appears to have declined in number in southeastern Manitoba in the past few decades (R. Koes, pers. obs.). Widespread reforestation in eastern North America is likely a factor in declines of this edge- and shrub-dwelling species. Not being at risk in any significant part of its range, it is not the subject of direct conservation efforts, but continued population monitoring is important.