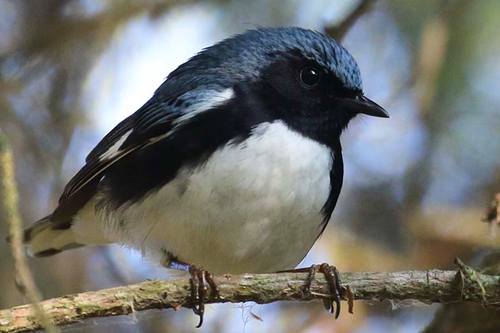 Characteristics and Range The male Black-throated Blue Warbler is a handsome bird with blue upperparts, black face and flanks and white underparts. The olive female resembles a Tennessee Warbler but has a small white patch at the base of the primaries (as does the male). The species breeds from northwestern Ontario and northeastern Minnesota east to the Maritimes and south through the Appalachians, while it winters in the Caribbean and the Yucatán Peninsula (Janssen 1987, Joos 2007).

Distribution, Abundance, and Habitat The Black-throated Blue Warbler is a rare but annual visitor to Manitoba. There were several records during the atlas years, including during the breeding season, but only one sighting, at Moose Lake in extreme southeastern Manitoba, was considered possible breeding evidence. This warbler nests in the dense understorey of unbroken tracts of deciduous or mixed forest. Although borderline habitat seems to be present in parts of the province, especially in the Boreal Hardwood Transition, no confirmed breeding evidence of nesting has ever been obtained. There is, however, a remarkable breeding record for the Porcupine Hills of Saskatchewan (Smith 1996), as well as an apparent over-summering male in Riding Mountain in 2007 (heard and seen on 9 June and again on 1 July, K. Burton, pers. obs.), so future breeding in Manitoba is certainly possible.

Trends, Conservation, and Recommendations This species is not of conservation concern globally and its occurrence in Manitoba is too limited to warrant management consideration here.