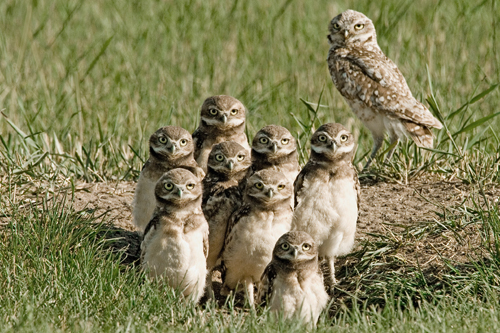 Characteristics and Range The Burrowing Owl is famous for its unusually long legs and atypical habit of nesting in an underground burrow (made by a mammal). As it likes to perch on ground-squirrel mounds, it may be overlooked for a ground-squirrel. It is white-flecked brown above and brown-dappled white below; the only likely confusion in open-country habitat is with the much larger Short-eared Owl. It is found in open habitats (especially grasslands, shrublands, and deserts) from the Canadian prairies and the northern Great Basin south through Middle America to southern Argentina. It is resident in much of its range but northern populations are migratory and winter from the southern U.S.A. south to Honduras (Poulin et al. 2011).

Distribution, Abundance, and Habitat During the atlas period, confirmed or probable breeding came from only five squares in southwestern Manitoba (three locations in 2010 and 2011, including one site used in both years). There has been no confirmed nesting in Manitoba since 2011, although there have been tantalizing, but unsubstantiated, reports and a few single birds observed annually. As described in The Birds of Manitoba, this owl is on the verge of extirpation here. There is some hope of a comeback when the recent wet period (20+ years), with its obvious disadvantage to an underground nester, reverts to drier conditions. The Burrowing Owl prefers well-drained areas with short or sparse vegetation such as moderately or heavily grazed pasture, but it may also be found in native prairie, haylands, fallow fields, and rights-of-ways. Although it prefers short or sparsely vegetated areas for nesting, it often forages in nearby areas with taller vegetation (Froese 2016).

Trends, Conservation, and Recommendations Although still abundant in South America, resident populations faring better than migratory ones, the status of the Burrowing Owl in Canada is dire. It lost ~90% of its population from 1990 to 2000 and then most of the remainder, e.g., 64% 2005 - 2015 (COSEWIC 2017a). It is listed as Endangered in Manitoba and Canada. In Manitoba, its numbers apparently increased following European settlement, but declines were already evident by the 1920s. Although it probably did fairly well during drought years in the 1930s, modern agricultural practices and fewer cattle operations led to declines thereafter. Much of its former Manitoba range, east to the Red River valley and north to Dauphin, was subsequently lost; by the late 1980s fewer than 30 pairs nested only in extreme southwest Manitoba (Ratcliff 1886, De Smet 1992). A particularly wet stretch of summers during the 1990s further reduced nesting success and there were few reports in Manitoba from 1996 to 2005 (De Smet 1997, Froese 2016). There was a slight rebound in 2006 and at least 13 nesting pairs were located in 2008. Abnormally wet summers thereafter caused its numbers to plummet to near zero. Habitat loss through cultivation and severe degradation of grasslands has been the primary driver of declines but more recently the dwindling population suffers from vehicle collisions, severe weather, reduced prey populations and increased predation (COSEWIC 2017a). Intensive recovery efforts, including reintroductions and provision of artificial nest burrows, occurred in Manitoba from 1987 to 1996, and a captive-breeding and release program began in 2010 (Manitoba Burrowing Owl Recovery Program), but numbers have not rebounded (Froese 2016). A top priority is to address the causes of poor nesting success and survival throughout the Great Plains.