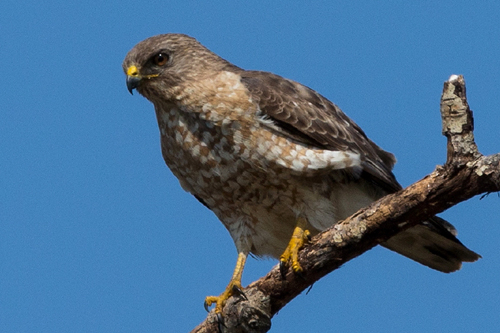 Characteristics and Range Manitoba's smallest buteo is a woodland denizen, recognizable by its size, barred underparts, and short black-and-white banded tail. The dark morph is rarely observed in Manitoba. Though conspicuous on arrival and while establishing territory, it is otherwise unobtrusive, usually hunting small mammals, amphibians, and birds from perches below the forest canopy or at roadside edges in the forest (Goodrich et al. 2014). The breeding range covers much of the eastern half of North America, with a westward extension across the Prairie Provinces to British Columbia (Goodrich et al. 2014). The vast majority of birds winter from southern Mexico to northern South America (Goodrich et al. 2014), with huge migrating flocks funneling through the southern United States and Mexico. Migrating flocks in Manitoba rarely exceed 100 in spring or 200 in fall (The Birds of Manitoba) but an exceptional fall count of 3,495 birds took place at Lynch Point on Lake Manitoba on 13 September, 2003 (Koes and Taylor 2004).

Distribution, Abundance, and Habitat Although most records occurred in the Boreal Taiga Plains, by far the highest percentage (69% of squares with ≥3 hours of effort) of occupied squares was found in the Boreal Hardwood Transition. Whether this is a true reflection of the species' abundance or an artifact of intense coverage is unclear, but the combination of preferred habitat and the abundance of frogs, one of its main prey items, in the latter region make the former interpretation plausible. Preferred breeding habitat consists of mature mixed woods, interspersed with forest openings and ponds, though boggy coniferous forest is also occupied. Within these habitats the species is nowhere common in the province, with daily counts rarely exceeding half a dozen birds (The Birds of Manitoba). The breeding range as documented by the atlas stretches almost 300 km farther north than indicated in The Birds of Manitoba, reaching the Lynn Lake, Gillam, and Shamattawa areas, although thinly distributed and mostly near large rivers and lakes.

Trends, Conservation, and Recommendations The Broad-winged Hawk has shown a slight but statistically significant increase in Canada since the 1970s but no significant trend in Manitoba, where it is considered stable. On the wintering range serious threats may be posed by habitat loss, fragmentation, or alteration, in addition to shooting and the use of pesticides (Goodrich et al. 2014). Forestry practices, such as logging trees before they reach maturity, may locally affect the Manitoba-breeding population.