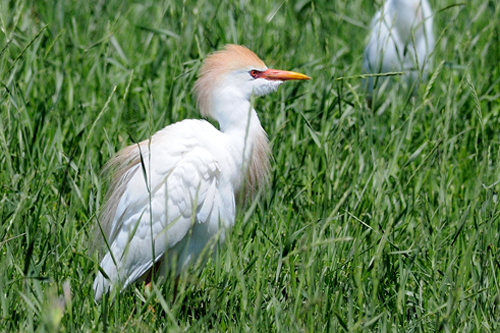 Characteristics and Range The Cattle Egret is found on all continents, albeit only as accidental on some Antarctic islands. It is a stocky heron with white plumage and, during the breeding season, buffy areas on the head, breast, and back. Famous for its remarkable dispersal capabilities, with individual juveniles dispersing up to 5,000 km, the range of the Cattle Egret has greatly expanded from its origins in Eurasia and Africa. There, it associated with herds of large mammals, both wild and domesticated. First recorded in South America in 1877, it was well established in the Americas by the 1930s and bred for the first time in Canada in 1962 (Telfair II 2006, Crosby 1972). Manitoba is currently the Cattle Egret's northernmost breeding locality. It winters from the southernmost U.S.A. to Central America and the Caribbean, in areas where January temperatures generally remain above 4°C (Telfair II 2006).

Distribution, Abundance, and Habitat The first sighting of this species in Manitoba was at Griswold in 1961 (Shortt 1961). From the mid-1970s, it has been reported almost annually, sometimes in large numbers. The highest tallies occurred in 2005 and 2006, including 315 in the Maple Lake / Oak Lake area (Koes and Taylor 2005) and 356 at Whitewater Lake (Koes and Taylor 2006), but numbers have decreased since then to low double-digit numbers during the atlas period. Almost all atlas records were at Whitewater Lake (the only site with confirmed breeding) and the extreme southwestern part of the province (Oak Lake); however, possible breeding was indicated by summer sightings near the Shoal Lakes in the southwestern Interlake.

At Whitewater Lake, adults were seen carrying nesting material in 2003 (Koes and Taylor 2004) and breeding was confirmed in 2006 (Bazin 2006). The colonies at Whitewater Lake were found in deep-water emergent vegetation or drowned shrubs, far from land. Whitewater Lake provides both plentiful nesting habitat and nearby feeding areas, in the form of pastures with cattle and ranched bison.

Trends, Conservation, and Recommendations Although high water levels likely permitted this species and other long-legged waders to colonize Whitewater Lake, recent extreme levels augmented by farming drainage into the lake have caused considerable damage to infrastructure and changed marsh characteristics (Turtle Mountain Conservation District and East Souris River Watershed Planning Authority 2011). This has apparently flooded out parts of large colonies and may have led to shifts in breeding sites, with more scattered, smaller colonies being established. Proposals to stabilize water levels in this terminal basin are likely to prove highly detrimental to the productivity of the marsh complex.