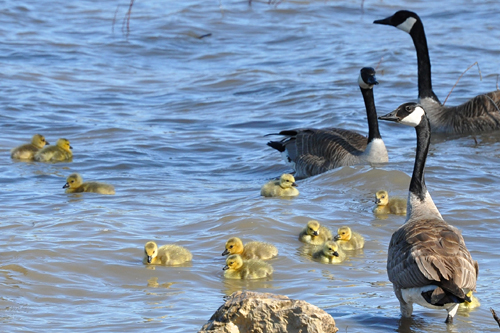 Characteristics and Range A bird that inspires varied emotions, reviled by some and admired by others, the Canada Goose is familiar to all Canadians. This species shows extraordinary size variation between populations, with the largest subspecies being almost swan-sized and the smallest smaller than the Snow Goose. All subspecies share the following characteristics: brownish upperparts, with paler underparts, and a black neck and head with a white chin-strap. Canada Geese now breed virtually throughout Canada and the U.S.A., except the northernmost Arctic islands and parts of the extreme south (Baldassarre 2014). Introduced populations occur elsewhere. The winter range stretches along the west coast from the Alaska Panhandle to northern Mexico and through most of the conterminous U.S.A. and southern Ontario; however, small but increasing numbers winter north of the described range, including in southern Manitoba. This species exhibits a leapfrog migration pattern with the small, northern breeders wintering farther south than Manitoba's "giants" that remain as far north as Minnesota (Mowbray et al. 2002).

Distribution, Abundance, and Habitat The Canada Goose breeds throughout Manitoba, with the probability of observation being highest in the Taiga Shield & Hudson Plains, Arctic Plains & Mountains, and the Prairie Potholes. The pattern of relative abundance was similar, but was also high in the southern Interlake and the region immediately east of the southern half of Lake Winnipeg. Nearly 90% of surveyed squares in the Prairie Potholes were occupied, with the frequency decreasing northwards to about 35% in the Boreal Softwood Shield and then increasing farther north to over 50% in the Taiga Shield & Hudson Plains and 100 % in the Arctic Plains & Mountains. The breeding habitat is wide-ranging: tundra, boreal forest lakes and rivers, mountain meadows, prairies, parkland and urban areas (Mowbray et al. 2002). Nests may be constructed on muskrat mounds, small islets in ponds, in reed or cattail beds, on river banks and even structures, such as flat roofs or abandoned bridges, and even occasionally in stick nests high off the ground.

Trends, Conservation, and Recommendations Mere decades ago, some subspecies, such as the "giant Canada Goose", were considered nearly extinct (The Birds of Manitoba), leading to measures being taken to re-establish populations in parts of Canada and the U.S.A. These efforts have been successful to the point that the species is now considered a nuisance, especially in many urban and suburban areas, recently even as far south as Florida and Louisiana (Baldassarre 2014). Abundant fecal matter has led to eutrophication of ponds, and contamination of golf courses, parks, and swimming and boating areas. Considerable damage is also done to cereal crops, especially when harvesting is delayed and migrant or wintering flocks devour or trample the crop. Long-term BBS data show a steady increase in numbers, especially since the end of the 20th century. The Manitoba population is estimated to have tripled between 2002 and 2012 (BBS data). Canada Geese are obviously resilient enough to withstand current levels of hunting pressure, losses to predators, and degradation of breeding habitat. Measures to control the explosive population growth of this species have so far proven to be ineffective.