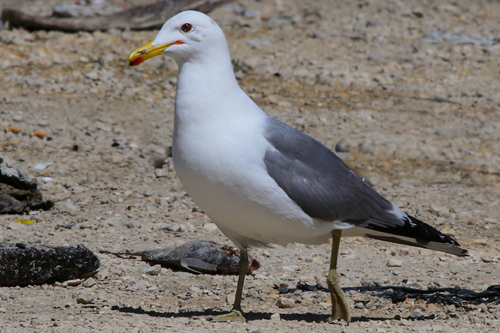 Characteristics and Range Midway in size between Herring Gull and Ring-billed Gull, the California Gull in breeding plumage can be recognized by its slightly darker grey upperwings and back, its relatively long, bright yellow bill, with black and red spots near the tip, yellow-green legs, and dark eyes. The breeding range is centred around large lakes from California, Nevada and Colorado in the south to the Northwest Territories in the north and to western Manitoba in the east (Winkler 1996). Most birds winter along the Pacific coast from British Columbia south to Mexico, with smaller numbers at inland waters in the western U.S.A. The species is best known to Manitoba birders as an uncommon spring migrant and summer visitor at large landfill sites.

Distribution, Abundance, and Habitat Very few potentially breeding birds were seen during the atlas period; records came from the vicinity of Highway 391 (between Thompson and Lynn Lake) and from the northeast corner of the south basin of Lake Manitoba. The latter area is near Dog Lake, where the first breeding in Manitoba was recorded in 1954 (The Birds of Manitoba). Areas with large breeding colonies found in 1969, 1987, and 1999 at a lake referred to as Pelican Lake near Camperville and at islands in Lake Winnipegosis (The Birds of Manitoba) were either unsurveyed or surveyed from the air (whence this species could not be readily identified). Many of the above areas are difficult to access, and as a result, atlas records no doubt greatly underestimate the overall distribution and abundance. A concentration of up to 55 California Gulls at Whitewater Lake in summer 2010 was not thought to be associated with local breeding.

California Gulls breed colonially on islands in large lakes, sometimes with Herring Gulls or Ring-billed Gulls. Feeding takes place at the lakes where the birds breed, at docks and lakeside communities, and at nearby croplands and at landfills.

Trends, Conservation, and Recommendations The species is considered of Least Concern globally and is not listed in Canada. Overall the species is believed to be thriving, with management concerns only at the local or regional level (Winkler 1996). Potential threats in Manitoba include disturbance or destruction of nesting colonies. Improved protection of colonial nesting islands would doubtless benefit this and associated species.