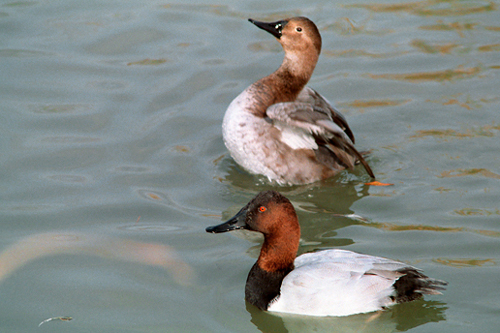 Characteristics and Range Readily distinguished by its sloping bill and forehead profile, the Canvasback is named for the coppery-headed breeding male's near-white back and flanks, contrasting with black areas fore and aft; other plumages are more subdued. The main breeding range extends from western Minnesota and the eastern Dakotas to Yukon and Alaska. Secondary breeding areas are scattered south to Colorado, Arizona, and northern California, and east to the lower Great Lakes (Mowbray 2002, Baldassarre 2014). The core breeding range straddles the northern Prairie Potholes and southern Boreal Taiga Plains, including southwestern Manitoba. More northerly breeding areas become especially important during drought periods on the prairies. The winter range includes much of southern and central U.S.A., northern and central Mexico, with northern extensions (subject to severity of the season) to the lower Great Lakes, southern New England, and southern British Columbia. Key wintering areas include Chesapeake Bay (much less important than formerly), Puget Sound, San Francisco Bay, the lower Mississippi River valley, and several Gulf coast locales (Mowbray 2002, Baldassarre 2014). Manitoba-banded Canvasbacks have been recovered throughout this range, but mostly east of 100°W.

Distribution, Abundance, and Habitat Atlas records are concentrated in southwestern Manitoba, notably in the Minnedosa potholes and a zone in the southwest corner including Oak Lake, Whitewater Lake, and nearby wetlands. Secondary areas are in the Interlake and other parts of the Boreal Taiga Plains, with a cluster of records near The Pas. A halo of elevated abundance around southern Lake Manitoba suggests diminished importance for Delta Marsh, famously associated with the species (Hochbaum 1944). Canvasbacks were found in 46% of squares with ≥3 hours of coverage in the Prairie Potholes, but only 13% in the Boreal Taiga Plains. Occurrence elsewhere was minimal, with two confirmed breeding records in the Boreal Hardwood Transition and nothing elsewhere. Prior to the atlas, isolated breeding was noted at Pinawa and Churchill, and a slightly larger breeding range was estimated (The Birds of Manitoba). Breeding habitat ranges from potholes to large deepwater marshes and sheltered bays on large lakes (Baldassarre 2014). Historic records mention post-breeding concentrations of moulting males on several lakes in the Boreal Taiga Plains (The Birds of Manitoba), but this dœs not seem to be a factor in the atlas data.

Trends, Conservation, and Recommendations Continental population estimates between 1955 and 2011 show medium-term fluctuations rather than a long-term trend, with extremes of 360,200 birds in 1962 and 864,900 in 2007 (Baldassarre 2014). Numbers primarily reflect the quality of breeding habitat, and have been generally high during the prolonged wet cycle since 1995, consistent with a positive BBS trend in the Prairie Potholes as a whole. Long-term biological research, including studies in the Minnedosa potholes, provides a basis for management of Canvasback habitat and regulation of hunting, although the effectiveness of adjusting bag limits is difficult to determine (Mowbray 2002, Baldassarre 2014). Loss of breeding habitat to agriculture and habitat degradation in migration stopover and wintering areas are all of concern. Many environmental contaminants have been detected in Canvasbacks, but mostly at low levels. The most significant exceptions are lead, notably in Louisiana (partially alleviated by banning lead shot for waterfowl hunting), and selenium in San Francisco Bay (Mowbray 2002, Baldassarre 2014). No special recommendations are made here for a species that is already subject to intensive management, research, and monitoring.