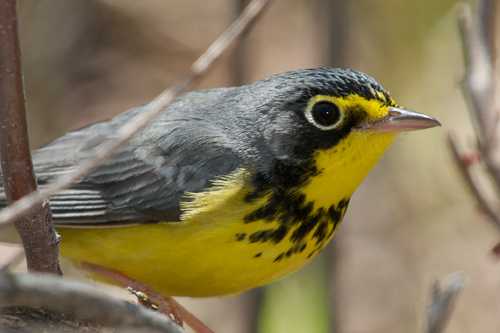 Characteristics and Range The bright yellow and slate-grey Canada Warbler is easily identified by its white eye ring, black necklace, and yellow "spectacles". The Canada Warbler breeds across the southern boreal forest, around the Great Lakes, eastward to the Maritime Provinces and New England and south along the Appalachian chain. It is fittingly named, with over 80% of its breeding range in Canada (COSEWIC 2008a). As one of the latest arriving and earliest departing migrants, the Canada Warbler spends relatively little time in Manitoba before migrating back to the cloud forest of the Andes in northern South America where it overwinters (Reitsma et al. 2010).

Distribution, Abundance, and Habitat The distribution of the Canada Warbler is generally limited by the availability of mature forest and, as such, peak abundances occur in contiguous portions of the boreal forest. In Manitoba, Canada Warblers are primarily associated with slopes, escarpments, and valleys near watercourses and lakes in the southern part of the boreal biome. These slopes typically support a relatively lush understorey that is dominated by beaked hazel and may include willow, alder, birch, wild rose, mountain maple, balsam poplar, or sphagnum. In some regions, such as in the Whiteshell area and the Porcupine Hills, dense second growth on uneven terrain within a larger forest matrix also supports breeding Canada Warblers. The relative abundance of Canada Warblers was highest in the Boreal Taiga Plains, but only slightly higher than the Boreal Hardwood Transition and the Boreal Softwood Shield. Abundance was high on the slopes of the Manitoba Escarpment and The Pas Moraine (primarily the southern slope in the vicinity of lakes), but decreased southward from the Porcupine Hills to Riding Mountain National Park. High abundance was also reported around Nopiming and Whiteshell Provincial Parks, but both abundance and probability of observation in eastern Manitoba decreased westward towards the boreal-parkland transition. Overall, relative abundance and probability of observation decreased north and south of the core areas described above, and was low in much of the Interlake, presumably because of the limited amount of mature forest with a dense understorey.

Trends, Conservation, and Recommendations The Canada Warbler is designated as Threatened both federally and provincially. These listings are supported by BBS data that suggest this species is declining in Canada by nearly 3% per year and across its range as a whole, despite apparent stability in Manitoba, albeit with low reliability resulting from relatively few BBS routes in the species' range. The cause of the decline is currently unknown; however, it is believed to be linked to deforestation and habitat loss throughout the species' range (COSEWIC 2008a). The Canada Warbler International Conservation Initiative has now been formed to investigate the mechanisms of decline and to develop conservation opportunities.