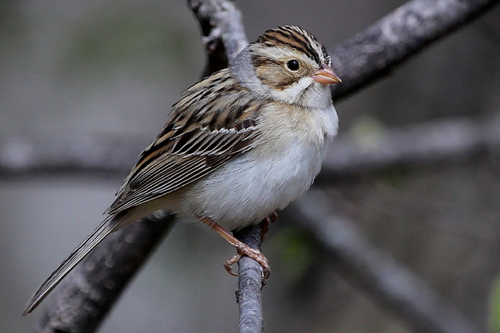 Characteristics and Range The repetitive, insect-like buzz of the Clay-colored Sparrow is easily overlooked, but once an observer is attuned to it, brushy areas in the prairies can come alive with the calls of this small sparrow. The breeding range is centred in the northern Great Plains, but extends west to valleys in the Rocky Mountains, east in a band through the Great Lakes area to Québec, north to Great Slave Lake, and in several disjunct pockets, including the western James Bay area (Grant and Knapton 2012). This sparrow winters in Mexico and southern Texas.

Distribution, Abundance, and Habitat Clay-colored Sparrows were found throughout southern Manitoba (albeit sparsely along the Ontario border) and north in reasonable numbers to the edge of the Boreal Taiga Plains around Wabowden, as described in The Birds of Manitoba. Within the Boreal Softwood Shield, the species was widespread but thinly distributed, well north of the estimated range limits of Grant and Knapton (2012) and The Birds of Manitoba. This range extension is illustrated by northerly clusters of records in the Taiga Shield & Hudson Plains near Gillam and Lynn Lake, plus five isolated records northward to Churchill. The Clay-colored Sparrow was ubiquitous in the Prairie Potholes, where it was detected in 97% of squares with ≥3 hours of effort, common in the Boreal Hardwood Transition (75%) and Boreal Taiga Plains (71%), and scarce in the Boreal Softwood Shield (10%). Relative abundance analysis showed the highest concentrations in southwestern Manitoba, especially south and west of Lake Manitoba, except at major features of the Manitoba Escarpment. There were also areas of high abundance along the boreal-parkland transition, but lower numbers in the agricultural belt of south-central Manitoba. North and east of the boreal-parkland transition, abundance dropped off sharply within the boreal biome. The probability of observation shows a similar pattern, but remained high even in areas of relatively low abundance in the Prairie Potholes.

The Clay-colored Sparrow favours scattered low shrubs such as those typical of habitat edges in grassland in the northern Great Plains and in openings within aspen parkland (Grant and Knapton 2012). It is also found in some types of cropland, but at lower densities than in grassland, and will use alfalfa and haylands in much the same way as shrublands (Grant and Knapton 2012). Detections in the northern portion of the Boreal Taiga Plains and in the Boreal Softwood Shield were frequently along roadsides, railways, and transmission lines, where shrubby ditches and grassy verges created suitable habitat, but not to the exclusion of suitable brushy habitat, such as areas of swamp birch (The Birds of Manitoba).

Trends, Conservation, and Recommendations The Clay-colored Sparrow has suffered small declines in Manitoba and Canada since the 1970s (BBS data). While benefiting from woodland clearance in the boreal biome and expanding its breeding range in eastern North America (Grant and Knapton 2012), it has also lost habitat as grassland and shrubland were converted to cropland (The Birds of Manitoba). It is, nonetheless, arguably the most abundant shrub-grassland species of the northern Great Plains (Grant and Knapton 2012) and not currently of major conservation concern.