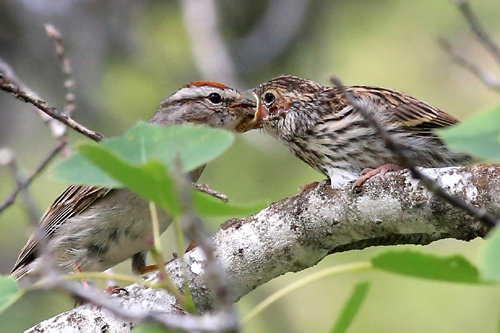 Characteristics and Range In breeding plumage, this small sparrow is distinguished by its reddish-brown cap, bold whitish supercilium, unmarked light-grey breast, and blackish bill; streaky juveniles are difficult to distinguish from young Clay-colored Sparrows. The breeding range spans boreal regions from eastern Alaska to southern Newfoundland, southward through much of the U.S.A. (with a void in the southern Great Plains and excluding parts of the southernmost states), then in a narrow band through Mexico and locally to northern Nicaragua. Migratory northern breeders overwinter from the southern U.S.A. to northern Mexico. Winter occurrence in Manitoba is extremely rare.

Distribution, Abundance, and Habitat As expected, the Chipping Sparrow was found by atlassers throughout the province, being undetected in only a few southern squares and widespread in the boreal forest. It becomes scarce in the Taiga Shield & Hudson Plains, though it was found along the lower Nelson and Hayes Rivers and even on the coast near Churchill and York Factory. Conifers and sparse ground cover are common components of the preferred habitats, be they garden ornamentals, mature forest trees (especially near edges and openings), or post-fire growth. Small conifers and dense shrubbery or vines are preferred for nesting. The species is also abundant in suburban areas and rural towns. Its abundance was generally high across the boreal forest, with local peaks in the Grand Rapids area and at major features of the Manitoba Escarpment, whereas numbers were substantially lower in intensively farmed parts of the Prairie Potholes region, where treeless cropland prevails. The probability of observation was uniformly high, except for along the Hudson Bay coast and a narrow halo of reduced detection around Lake Manitoba.

The Chipping Sparrow is a known predator of jack pine budworm, a significant forest insect pest in Manitoba, though bird predation appears to be most important during periods of low population levels of the insect (McCullough 2000).

Trends, Conservation, and Recommendations This adaptable sparrow evidently benefited from many of the habitat changes associated with European settlement of North America, and little concern has been expressed for its conservation and management (Middleton 1998). Nevertheless, analysis of BBS data since the 1970s reveals significant rates of decline that are higher in Manitoba than Canada-wide, though data are sparse for the boreal forest. This emphasizes the importance of continued monitoring even for widespread and seemingly secure species. Indeed, BBS data reveal decreasing trends through most of the western half of the range, the Appalachians, and much of the northeast, partly offset by increases in a broad band from the Dakotas to the Gulf coast. Ground feeding and a preference for low nesting sites probably make this species especially vulnerable to domestic cat predation near human habitation.