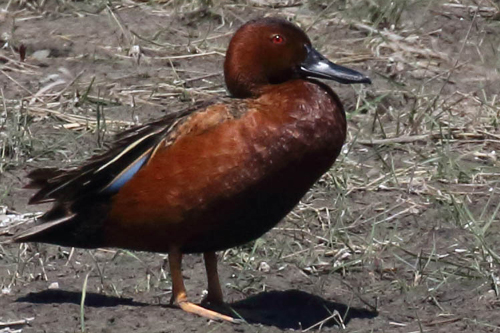 Characteristics and Range In breeding-plumage, the male Cinnamon Teal is easily distinguished from the more common Blue-winged Teal (with which it occasionally hybridizes) by its overall deep reddish-brown colour and lack of a white crescent in front of the eye. In addition, it lacks the white patch on the rear flank shown in the male Blue-winged Teal. The female is much more difficult to identify, but is longer-billed and slightly paler than the female Blue-winged Teal. In flight both species show extensive blue wing coverts. In the nesting season, the Cinnamon Teal is restricted to western North America, from southern British Columbia, Alberta, and southwestern Saskatchewan south to central Mexico. It winters from extreme southwestern U.S.A. to southern Mexico. Other populations occur in South America (Gammonley 2012).

Distribution, Abundance, and Habitat Since the mid 1970s, the Cinnamon Teal has been a near-annual visitor to Manitoba. Sightings of males predominate, no doubt due to the difficulty in identifying females. Occasionally pairs have been seen. During the atlas years, only sightings near Melita (K. De Smet, late May, 2010) and Marquette (G. Grieef, 4 July, 2014) were entered as possible breeding; others such as a male found southeast of Brandon (10 May, 2010, K. De Smet), were considered non-breeders. It appears likely that breeding takes place occasionally, especially in the extreme southwest. The Cinnamon Teal is found in freshwater or brackish wetlands, where it feeds in shallow water on both animal and plant material. Nests are well-concealed in vegetation near the water.

Trends, Conservation, and Recommendations Trends, Conservation, and Recommendations Cinnamon Teal populations are apparently stable and hunting pressure is low. Availability and quality of wetlands and surrounding nesting habitat, especially in the Great Basin, and competition with the Blue-winged Teal, appear to be the most important limitations on the North American population (Gammonley 2012, Baldassarre 2014).