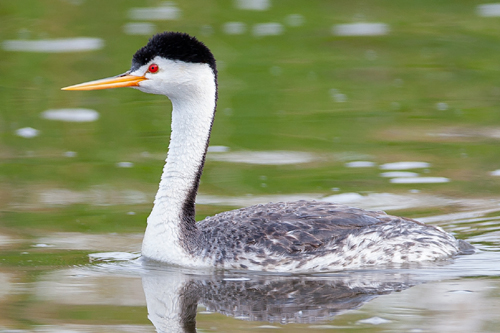 Characteristics and Range Clark's Grebe is similar in appearance to the closely related Western Grebe, but slightly smaller, with the eye surrounded by white and a bright yellow to orange bill (as opposed to the greenish bill of the Western Grebe). The range of Clark's Grebe shows a large degree of overlap with that of the Western Grebe, with which if often associates, breeding from Manitoba to British Columbia and south to California and central Mexico and wintering mostly along the Pacific coast from Vancouver Island to Baja California and Nayarit, as well as a few other areas such as the Gulf coast of Texas.

Distribution, Abundance, and Habitat Possible breeding evidence of Clark's Grebe was found in only three squares in the Prairie Potholes of southwestern Manitoba—at Whitewater Lake, Pelican Lake, and Swan Lake First Nation—and all were associated with Western Grebe colonies. None were recorded during the atlas period at Delta Marsh where previous breeding (or at least hybridization with the Western Grebe) has occurred (The Birds of Manitoba). None were reported after 2012 at Pelican Lake, where the number of Western and Clark's Grebes has drastically declined in recent years. There was no confirmed breeding during the atlas period; however, breeding was subsequently confirmed at Whitewater Lake in 2016 and 2017; in both cases with downy young riding on the back of an adult Clark's Grebe but with the partners being a Western Grebe and a probable hybrid (C. Artuso, pers. obs.). In Manitoba at least, there appears to be no clear differentiation of habitat between the two Aechmophorus grebe species.

Trends, Conservation, and Recommendations This species is rare in Canada, and Pelican Lake was the site of the first confirmed breeding in Canada in 1986 (De Smet 1987). Information on population and trends is limited, in part because this species was long considered to be a mere colour variant of the Western Grebe. Clark's Grebe is likely vulnerable to the same threats as noted for the Western Grebe, as well as genetic swamping caused by hybridization here at the fringe of its breeding range.