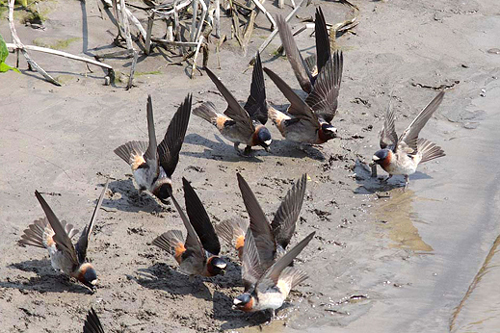 Characteristics and Range Steely blue above and pale below, with pinkish-buff to chestnut throat, collar, and rump, the Cliff Swallow is also distinguished by its robust proportions, almost square-cut tail, and globular mud nests. The breeding range covers much of North America from Alaska and boreal Canada (excluding Newfoundland) to Mexico. The core winter range is between southern Brazil and south-central Argentina (Brown et al. 2017).

Distribution, Abundance, and Habitat The Cliff Swallow's current distribution in Manitoba is closely tied to the availability of bridges, dams, and buildings of all sizes with sheltered recesses for nesting, although breeding was also confirmed along northern rivers such as the Seal andChurchill. Widespread construction of human infrastructure in the 19th century led to long-term population increases and range expansion (Brown et al. 2017). By the late 19th century, it had become the most abundant swallow in Manitoba (Thompson [Seton] 1890)—perhaps still true today, at least in the southwest. Large colonies number several hundred pairs, while small ones at outbuildings and under small bridges or in large culverts may have only a few birds, often in association with Barn Swallows.Atlas data show peak square occupancy and abundance in the Prairie Potholes region, especially in the southwest, and lower numbers in the Boreal Hardwood Transition. The Prairie Potholes represent the northern edge of a large area of high abundance throughout the Great Plains (BBS data). Scattered atlas records extend north across the boreal forest to within ~130 km of both the Hudson Bay coast and Nunavut, close to the diffuse range boundary estimated in The Birds of Manitoba. The species is known to breed in Nunavut (Richards and White 2008), including a large colony observed at Nueltin Lake in 1947 (Mowat and Lawrie 1955); it is a rarity at Churchill (Jehl 2004). Locally high abundance near the upper Red and lower Winnipeg rivers is linked in part to availability of bridges and, in the latter case, dams supporting large nesting colonies. Areas of high abundance (but not probability of observation) north of Norway House and near Lynn Lake may be exaggerated because they are presumably linked to colonies near highways and communities.

Trends, Conservation, and Recommendations Though not listed by COSEWIC, the Cliff Swallow has been declining in Canada since the mid-1980s (McCracken 2008), contrasting with net increases in the U.S.A. (BBS data). Analysis of BBS data shows generally decreasing trends in New England, most of Canada, and parts of the western U.S.A., but increases in most of the eastern U.S.A. Because they nest on human structures, Cliff Swallows often come into conflict with building owners who sometimes resort to destroying their nests. This destruction should be discouraged, especially if population declines continue. Disturbance at bridges and dams can be minimized by timing maintenance work to avoid the nesting season. Efforts to prevent nesting using netting and other materials, or by broadcasting distress calls, have had limited success (Brown et al. 2017). Disruption of Cliff Swallow nesting by House Sparrows can impact nesting success (Leasure et al. 2010); this may be a significant factor in southern Manitoba, but not in forested regions.