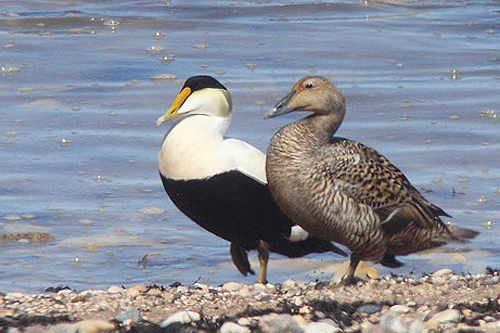 Characteristics and Range Slightly longer than a Mallard, but much bulkier, the Common Eider is Canada's largest duck. Breeding-plumaged males are strikingly marked with white upperparts, peach-coloured breast, black flanks and hind quarters, black crown and olive-green nape. Females of the Hudson Bay race sedentaria, which breeds in Manitoba, are buffy-grey and finely barred. Various other races breed along coasts in northern parts of the Northern Hemisphere. The Hudson Bay population winters in openings of the sea ice, especially at polynyas west of the Belcher Islands. Indeed, there are only a handful of records of individuals of this race away from the bay (The Birds of Manitoba). Eiders found in southern Manitoba and identified to race have all belonged to the west coast form v-nigrum (Koes 1987).

Distribution, Abundance, and Habitat All breeding records came from a 20 km-wide strip along the Hudson Bay coast between the Nunavut border and the vicinity of the Nelson River, with one remarkable exception: a nest with eggs was found at Nejanilini Lake, over 150 km from the coast, on 1 July, 2012 (K. De Smet, J Kayer). Greatest abundance was found in the Arctic Plains & Mountains. Although the species is common in the immediate Churchill vicinity, mapping results there are skewed because of locally high coverage. Common Eiders travel daily from their nests on tundra ponds to shallow coastal marine waters, where they feed by diving for molluscs, crustaceans and other invertebrates.

Trends, Conservation, and Recommendations Although this species is considered globally of Least Concern, the Hudson Bay population has apparently declined in recent decades. This population appears to be susceptible to mass die-offs from starvation during heavy ice years, such as in 1991-1992, when there was a 75% decline (Robertson and Gilchrist 1998, Gouldie et al. 2000). However, in the vicinity of Churchill there has been a marked increase since the 1960s, believed to be related to dispersal from the La Pťrouse Bay area, where high predation pressure from Bald Eagles and Red Foxes has reduced the number of breeders (Jehl 2004). Emerging threats include resource development in the Canadian Arctic, outbreaks of fowl cholera and other diseases, climate change, and over-harvesting (Gouldie et al. 2000, Government of Canada 2014).