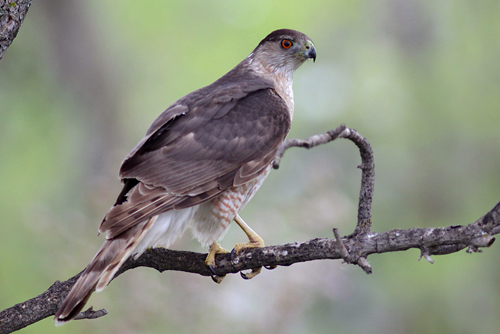 Characteristics and Range Cooper's Hawk is about the size of an American Crow, with a long, rounded tail and relatively short wings. Although the species is commonly seen in southern Manitoba during spring migration (late March through April) and for a brief period when the male performs display flights near the nest, it is mostly a secretive bird. It can be inconspicuous in wooded areas, where it makes hunting forays through the trees, low over the ground. The breeding range stretches across southern Canada, through the U.S.A. and into northwestern Mexico (Curtis et al. 2006). During both spring and fall migration the species is greatly outnumbered by the Sharp-shinned Hawk, but Cooper's Hawk is the most common breeding accipiter south of the boreal forest in Manitoba. It winters across much of the continental U.S.A., except the northernmost areas, and south to Guatemala (Curtis et al. 2006), although an individual banded in Manitoba was recovered in Colombia (Dunn et al. 2009). There are a few recent winter records in southern Manitoba, mostly early in the season.

Distribution, Abundance, and Habitat The breeding range falls almost entirely within the boundaries of the Prairie Potholes and the southern fringe of the Boreal Taiga Plains. These regions provide the preferred habitat of deciduous woodland, be it riverbottom forest, city parks, poplar woods in farmland, or other similar vegetation. Most of the confirmed breeding records were as a result of finding active nests, especially in or near Winnipeg. This apparent high density of breeding birds is partly due to the high number of observers in the area. Given the secretive behaviour of the species, it is likely that many nesting birds elsewhere were overlooked. Additionally, some Sharp-shinned Hawks and Northern Goshawks may have been misidentified as Cooper's Hawks. Sightings of all three species are often fleeting, and size overlap can sometimes make identification a challenge.

Trends, Conservation, and Recommendations There is no doubt that Cooper's Hawk has increased substantially as a breeding bird in southern Manitoba during the past few decades, although hard data are lacking. Adaptation to urban/suburban/rural habitats has likely played a role in the increase, especially as trees in riparian suburbs have matured. Decreased shooting of raptorial birds and the phasing out of DDT and other persistent pesticides may be responsible for the increase. The species appears to be stable as a breeder, although bioaccumulation of neonicotinoids and other modern pesticides may pose a new threat.