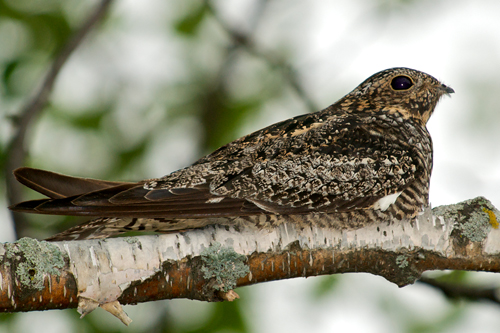 Characteristics and Range This crepuscular, robin-sized bird with camouflage colours and long wings can be detected by its beent call, the booming noise of its display flight, or its conspicuous hawking for insects at dusk and dawn. The Common Nighthawk breeds from Yukon to the Gulf of St. Lawrence, south to California and Florida, and then patchily farther south, mostly following the Continental Divide, to Panama (Brigham et al. 2011). A long-distance migrant, it winters across northern South America as far south as the Buenos Aires area (Brigham et al. 2011). It is one of the last spring migrants to return to Manitoba.

Distribution, Abundance, and Habitat The distribution of the Common Nighthawk was found to be essentially the same as that depicted in The Birds of Manitoba, largely province-wide except the northeast, only approaching the Hudson Bay coast near York Factory. It is a rare visitor to the treeline (Jehl 2004). Relative abundance and probability of observation both peaked in the central boreal forest, especially across the southern portion of the Boreal Softwood Shield where the species was detected in 32% of squares with ≥3 hours of effort (more than double the percentage in any other BCR). From the central boreal forest, abundance declined both southward towards the Prairie Potholes (6%) and northward towards the Taiga Shield & Hudson Plains (10%), with no birds being detected in the Arctic Plains & Mountains. The pattern of detections within the boreal forest suggests that burned areas and rock outcrops are favoured, although there were some pockets of reasonably high detection along rights-of-way such as seldom-used railways. Within the Prairie Potholes, most observations were associated with the Manitoba Escarpment (e.g., Arden Ridge), steep valleys with open gravel terrain (e.g., Qu'Appelle River valley), and sandhill landscapes (e.g., Lauder Sandhills and Spruce Woods). Very few detections were in grassland per se, a habitat known to be declining in usage (Brigham et al. 2011). Although there were a few detections in towns and cities, including Winnipeg, no occurrence of rooftop breeding, apparently now rare (The Birds of Manitoba), was noted. Proximity to wetlands or standing water may be an important habitat characteristic given the nighthawk's aerial foraging behaviour and congregations around insect emergences (Brigham et al. 2011).

Trends, Conservation, and Recommendations Having lost approximately half of its Canadian population since 1968 (COSEWIC 2007c), the Common Nighthawk is listed as Threatened both provincially and federally. Taylor (2009) analyzed late summer counts around Pinawa from 1976 to 2009 and inferred a large decline in local breeding nighthawks in the 1980s but more stable counts of transient (possibly northern breeding) birds. Massive migratory flocks noted until the 1990s in Minnesota and elsewhere (e.g., 43,690 counted in 150 minutes on 26 August, 1990 at Duluth), are becoming rarer, although the Duluth Hawk Watch site still sometimes sees season totals in excess of 30,000 birds (J. Long, pers. comm.). Although the reasons for the declines remain unclear, the Common Nighthawk is one of a suite of Threatened aerial insectivores that may be impacted by reductions in available insect prey (COSEWIC 2007c). Habitat loss or changes that render habitat unsuitable for this ground-nester (e.g., increased human disturbance) may also be a factor (COSEWIC 2007c).