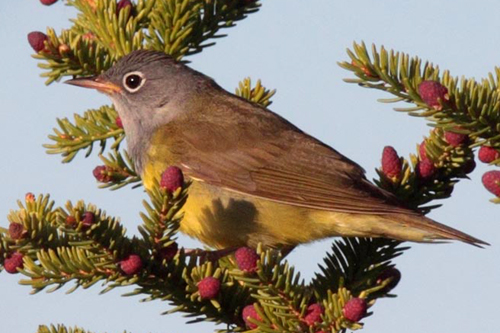 Characteristics and Range Mysterious, elusive, and enigmatic, the Connecticut Warbler is most easily detected in the breeding season by its powerful song, similar to that of the Common Yellowthroat but much louder and jazzier in rhythm. It closely resembles the Mourning Warbler in all plumages, being distinguished by its complete (unbroken) white eye-ring, larger size, and longer undertail coverts. This wood-warbler breeds within a narrow band across the southern boreal biome from extreme eastern British Columbia to Québec and extends south within the Boreal Hardwood Transition around Lake Superior (Pitocchelli et al. 2012). It winters primarily in the Amazon Basin but its winter distribution and ecology are poorly understood.

Distribution, Abundance, and Habitat Atlas results show the Connecticut Warbler nesting ~150 km north of the range estimated in The Birds of Manitoba and >400 km north of that depicted by Pitocchelli et al. (2012). Atlas results show nesting throughout the Boreal Softwood Shield, albeit localized, to the edge of the Taiga Shield & Hudson Plains, and southward to the periphery of the Prairie Potholes. These results suggest greater prevalence in eastern Manitoba than western Manitoba, with the highest mean abundance in the Boreal Softwood Shield, especially the east side of Lake Winnipeg, and the highest percentage of occupied squares in the Boreal Hardwood Transition. High abundance was also recorded in the Duck Mountains, Porcupine Hills, and the northern Interlake. Clumped distribution led to local abundance of >1.7 individuals per 15 point counts in these areas, with a peak of 30 individuals on 15 point counts along the Pigeon River. There is some evidence that roadside surveys underestimate Connecticut Warbler densities (Hanowski and Niemi 1995); significantly, 14 of the 15 squares with highest average abundance (all >0.5 individuals per point count) were roadless, the one exception having only 1.3 km of road.

The Connecticut Warbler nests in a wide variety of habitats, seemingly with the common denominator of having an understorey with some open areas, possibly important for ground foraging, and some areas with a multi-layered undergrowth (e.g., shrubs, saplings, or vegetated peat hummocks), presumably important for nesting cover (pers. obs., Pitocchelli et al. 2012). Territories are often associated with level terrain (P. Taylor, pers. comm.). In Manitoba, the Connecticut Warbler can be found in black spruce and tamarack bogs with a Labrador tea understorey, cedar bogs, various conifer stands with a peat-moss ground cover, boreal wetland edges including alder and willow swales, jack pine stands including those on sandy soils, poplar stands and mixed woods, especially with a few canopy gaps that permit a mixed understorey, and regenerating forest following fire or logging. In the boreal-parkland transition, for example on the edges of Riding Mountain National Park, it nests primarily in mature aspen with canopy gaps.

Trends, Conservation, and Recommendations Despite the local abundance discussed above, long-term declines in Manitoba and Canada (BBS data) give rise to increased conservation concern for this species. In addition to habitat loss, forest fragmentation causing increased predation and cowbird nest parasitism, and herbicide use depleting undergrowth in otherwise suitable habitats are detrimental (Pitocchelli et al. 2012). Geolocator data from four birds banded in southeastern Manitoba suggest the island of Hispaniola might be an important stopover site on this wood-warbler's trans-oceanic migration. Habitat loss away from the breeding grounds could therefore be an important consideration in understanding these declines (McKinnon et al. 2017).