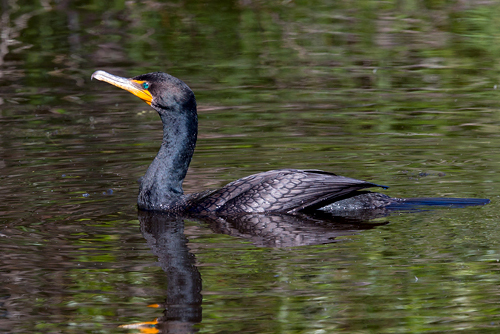 Characteristics and Range Nicknamed "crow duck", the Double-crested Cormorant is a large, dark bird with a long neck, longish tail, naked orange-yellow throat pouch and slender hooked bill. It flies with a kinked neck, silently, alone or in ragged v-shaped flocks. In spring, adults display either black or whitish bushy feather tufts on either side of the head, earning them their name. The Double-crested Cormorant nests across much of North America, at scattered locations on the Pacific Coast from the Aleutian Islands to Baja California and from the Rocky Mountains east across the northern Great Plains, around the Great Lakes, along the St. Lawrence River, and on the Atlantic coast in Newfoundland, New England, Florida, and Cuba. Some coastal populations are resident, but most northern and interior nesting birds migrate as far south as Mexico and the southeastern U.S.A. (Dorr et al. 2014).

Distribution, Abundance, and Habitat The Double-crested Cormorant was found throughout southern Manitoba, as far north as Thompson, as described in The Birds of Manitoba. It was most abundant in the Boreal Taiga Plains, though encountered with equal frequency in this BCR and in the Prairie Potholes. It was detected in a lower percentage of squares in the Boreal Hardwood Transition and the Boreal Softwood Shield. The majority of confirmed breeding records (colonies) were in Manitoba's three great lakes, but also occurred at smaller water bodies, including some in the Prairie Potholes near Glenboro and Melita. Many peripheral records of possible breeding likely refer to either non-breeders or commuters from distant colonies. Aerial surveys conducted in 2012 produced a population estimate for Manitoba's great lakes of 43,388 pairs in 47 colonies (Wilson et al. 2014), with a significant concentration (32%) in Dawson Bay. The median colony size of 343 pairs (maximum of 13,864 pairs) was higher than the previous survey (median of 143 pairs, Koonz 2000), suggesting more concentrated nesting in fewer locations (including notable absences at former large colonies such as George Island), likely related to high water levels during the atlas period. Nesting in Manitoba is typically on islands in lakes with adequate fish supplies and where the risk of disturbance is low (Dorr et al. 2014).

Trends, Conservation, and Recommendations Exploited by humans in myriad ways, including for food, bait, clothing, and soap-making (from eggs), the Double-crested Cormorant is much maligned and persecuted as a perceived competitor for fish, despite limited evidence of any impact on fish stocks. This lead to huge declines and local extirpations in the 19th century, exacerbated by eggshell thinning from environmental contamination (Dorr et al. 2014). Measures to curb persecution and contamination, especially when the species became one of conservation concern in the 1970s, led to increases and recolonization of old nesting areas, but the population remains modest. Surveys on Manitoba's great lakes suggest a complicated pattern of increases and decreases, possibly related to distributional shifts (Wilson et al. 2014). In Lake Winnipegosis, for example, numbers ranged widely between surveys in 1945 (9,862 pairs, McLeod and Bondar 1953), 1969 (1,602 pairs, Vermeer 1969), 1987 (35,181 pairs, Hobson et al. 1989), 1999 (36,497 pairs, Koonz 2000), and 2012 (20,149 pairs, Wilson et al. 2014). Nonetheless, comparative data suggest an overall increase from 17,495 pairs in 1979 (Koonz and Rakowski 1985) to 39,555 pairs in 2012, for the three major lakes alone (Wilson et al. 2014).