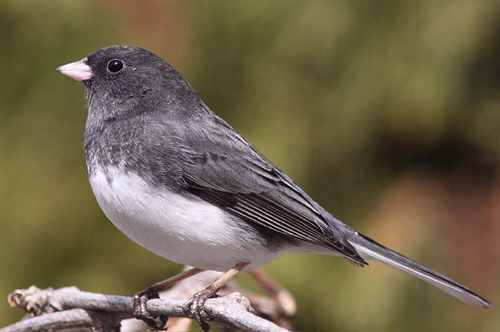 Characteristics and Range A striking sparrow, the Dark-eyed Junco sports a dark hood and flashes white outer tail feathers as it takes flight. This species breeds throughout the boreal forest, and south along the west coast of Canada and the U.S.A., as well as in the Rocky and Appalachian Mountain chains. In winter, it is found across southern Canada and most of the U.S.A. (Nolan et al. 2002). The Dark-eyed Junco is quite variable in appearance across its range and has distinct characteristics depending on the region it occupies. The species is divided into five major groups, with additional subspecies in each group. In Manitoba, the so-called "slate-colored junco" is the local breeder, although other subspecies and intergrades make rare appearances in the province.

Distribution, Abundance, and Habitat The atlas documented a breeding range throughout the province except the extreme northeast and the southwest. As depicted in The Birds of Manitoba, there is limited nesting in the Prairie Potholes except in a band southeast from Riding Mountain along the Arden Ridge. Unlike the southern range limit depicted in that publication, atlas data show that this band extends from the Arden Ridge south to the Morden area. With the exception of this southern band, the Dark-eyed Junco is largely a boreal-nesting species in Manitoba. Its peak relative abundance was in the Boreal Softwood Shield followed closely by the Taiga Shield & Hudson Plains. From these zones, abundance gradually decreased northward towards the Arctic Plains & Mountains, and southward towards the Prairie Potholes. Across the boreal regions, the probability of observation was uniformly high, dropping sharply in the tundra and the boreal-parkland transition. In the southern and Interlake portions of the Boreal Taiga Plains the probability of observation is generally low, except in the boreal islands of Riding Mountain and the Duck Mountains, where it increases sharply, although relative abundance remains low. This species is an uncommon breeder in the Prairie Potholes, being generally limited to areas such as Spruce Woods, where suitable habitat is found.  It prefers to breed in more open areas of coniferous and mixed woods, often with a fair amount of ground cover present, and this includes forest edges along roads and bogs (Nolan et al. 2002). It also shows a preference for recently burned areas, where it apparently benefits from forest clearing and enhanced ground-cover growth. In Manitoba, the Dark-eyed Junco is uncommon in deciduous forests.

Trends, Conservation, and Recommendations BBS trends for the Dark-eyed Junco show a population decline in Canada since 1970, although the trend in Manitoba is not statistically significant. The declines are not well understood and vary by subspecies. The Dark-eyed Junco may be locally affected by forest-management practices; however, as an abundant and widespread generalist, it is thought to be resilient to localized disturbances (Nolan et al. 2002).